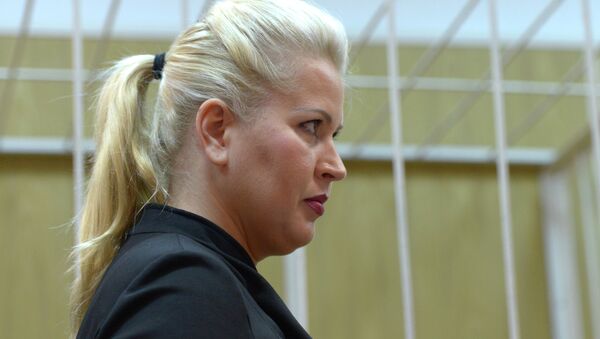 Russian investigators said Friday that they have confiscated a vast trove of diamonds, gemstones and gold from a key suspect in a fraud case involving the country’s military sector.

MOSCOW, October 4 (RIA Novosti) – Russian investigators said Friday that they have confiscated a vast trove of diamonds, gemstones and gold from a key suspect in a fraud case involving the country’s military sector.

The unfolding scandal last year claimed the scalp of former Defense Minister Anatoly Serdyukov, who was fired as details about the scale of the theft taking place under his watch began to emerge.

The Investigative Committee said Friday that the 126 million ruble ($3.9 million) haul of material seized from Yevgenia Vasilyeva, formerly head of the Defense Ministry’s property management administration, known as Oboronservis, included 57,000 diamonds and gemstones, and around 19 kilograms of gold jewelry.

Oboronservis performs a variety of services relating to Defense Ministry property, including the repair and maintenance of equipment and management of the department’s real estate.

Authorities have also confiscated a collection of what they said Vasilyeva had bought believing to be masterpieces of world art, but which proved to be cheap fakes.

Vasilyeva faces prosecution on 12 counts, including fraud, money-laundering and abuse of office.

Assets that Vasilyeva has been accused of embezzling include land in Moscow, the surrounding Moscow Region, and the Black Sea coast and an oil shipment terminal near Murmansk, prosecutors said.

Vasilyeva’s former boss, Serdyukov, remains a witness in the case, according to his lawyer Genrikh Padva.

Vasilyeva is currently under house arrest in her 13-bedroom luxury apartment in Moscow.

Other defendants in the fraud case include Yekaterina Smetanova, a former executive at Oboronservis, and her husband Maxim Zakutailo, the former head of an Air Force base.

Investigators said last year that the Oboronservis case had incurred damages of around 6.7 billion rubles ($208 million).

Investigators have to date managed to reverse the sale by the government of shares in the 31st State Design Institute of Special Construction that were worth over 190 million rubles ($6 million), but that were sold off at knockdown prices to two private companies.

The institute, located in downtown Moscow, designed facilities for the country’s defense needs.

Probes into another 20 similar cases of financial wrongdoing at the Defense Ministry are ongoing.

Russia's defense sector has for years been plauged by rampant corruption.

The Prosecutor General’s Office said in July that the estimated financial cost of corruption uncovered in the Russian Armed Forces in 2013 had risen by five and a half times to over 4.4 billion rubles ($130 million).