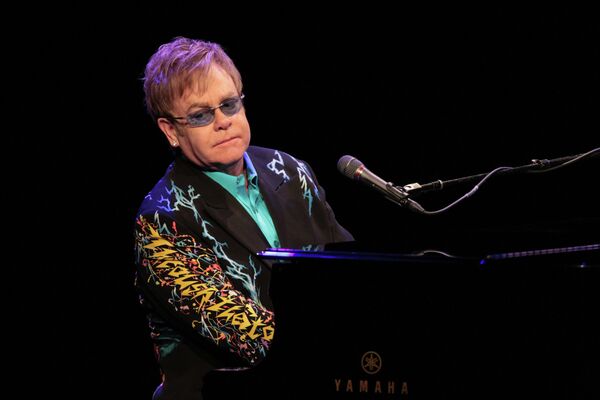 A conservative imam in Russia’s predominantly Muslim Republic of Tatarstan has called for a boycott of an upcoming concert by gay pop star Elton John, whom he branded as the “devil’s work in the shape of a pederast.”

MOSCOW, October 3 (RIA Novosti) – A conservative imam in Russia’s predominantly Muslim Republic of Tatarstan has called for a boycott of an upcoming concert by gay pop star Elton John, whom he branded as the “devil’s work in the shape of a pederast.”

Promotion of same-sex relations could send the republic’s capital Kazan down the same road as Sodom and Gomorrah, the ancient cities destroyed by Allah as punishment for the sexual delinquency of their inhabitants, imam Seidzhagfar Lutfullin warned.

“Sodomy…is what the world famous homosexual Elton John, who recently wed a man in public, is promoting,” said Lutfullin, the imam of Kazan’s Thousandth Anniversary of Islam Mosque.

Lutfullin called on believers to stay away from Elton John’s show in Kazan and recommended they warn relations and colleagues to do the same “because they may not know,” he said.

His statement on the mosque’s website was not dated; Russian media did not report on it until Thursday.

Sir Elton John, who is due to perform in Kazan on December 8, a day after his show in Moscow, said last month that he will support Russian gays, following the introduction of what he called “anti-gay laws” in Russia earlier this year outlawing promotion of homosexuality to minors.

The 66-year-old Englishman, who was knighted in 1998 and boasts 300 million records sold in his over four-decade long career, would risk spending 15 days in Russian custody or a fine of 5,000 rubles ($150) if he violates the so-called “gay propaganda” law, introduced last June.

Pop acts Madonna, Lady Gaga and Rammstein have previously been accused of espousing “gay propaganda” during their recent performances in Russia, but escaped without any legal consequences.

Lutfullin has been in the headlines before, including in 2008, when he staged an anti-Israeli rally where he compared Zionism to fascism; and 2012, when he led a protest against street ads for masseurs depicting scantily clad men and women, Btamedia advertisement industry website said last year.