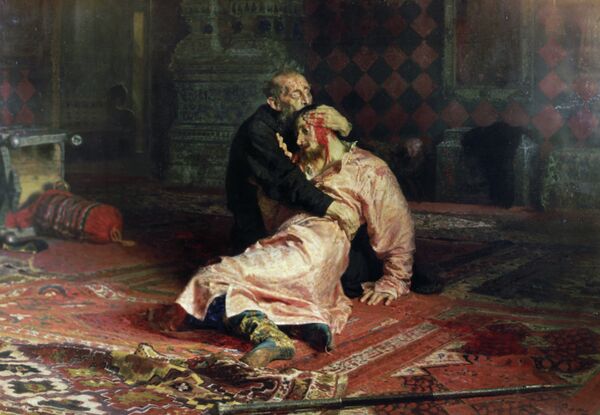 A Kremlin-linked dairy magnate and radical Orthodox Christian activist has demanded the removal from one of Russia’s main art galleries of a painting of Ivan the Terrible that he says is a smear on the nation’s reputation.

MOSCOW, October 3 (RIA Novosti) – A Kremlin-linked dairy magnate and radical Orthodox Christian activist has demanded the removal from one of Russia’s main art galleries of a painting of Ivan the Terrible that he says is a smear on the nation’s reputation.

Mainstream accounts of Russian history have it that the notoriously ruthless 16th century monarch did, in fact, kill his son in a fit of intemperate rage, but Boiko-Veliky insists the tsar was in fact an upstanding and landmark historical figure.

Tretyakov Gallery director Irina Lebedeva told RIA Novosti that the painting would continue to hang, but Boiko-Veliky’s appeal marks a new turn in an ongoing trend at revisionism that has appalled many professional historians.

Culture Minister Vladimir Medinsky, one of the people to whom the appeal was addressed, had not commented as of Thursday, but he may prove a sympathetic ear.

Medinsky, a former public relations manager, has published a series of books aimed at debunking alleged myths about Russia. These, he has written, include the ideas that serfs were ill-treated in tsarist times and that Russians have a penchant for heavy drinking.

Conservative activism is on the rise in Russia, with Christian activists protesting against a number of art projects. Targets have included modern art exhibits by prominent museum curator Marat Guelman, in the cities of Krasnodar and Novosibirsk in early 2012, and a show of works by British artists Jake and Dinos Chapman at the St. Petersburg’s Hermitage Museum in December.

Repin’s painting, which depicts the tsar in a state of appalled terror as he cradles his dying son in his arms, is considered a landmark of Russian realist art and features in most textbooks on Russian history, which have traditionally depicted Ivan the Terrible as a cruel tyrant.

While Ivan the Terrible is commonly acknowledged with strengthening the central government, it is also recognized he did this to a large extent by massacring his foes.

Boiko-Veliky, 54, has gained media exposure by combining his business pursuits with hardline Christian activism. In 2010, he ordered all employees in relationships to conduct church weddings or face dismissal.

He also posted a reward of 50,000 rubles ($1,500) for identities of members of the feminist punk band Pussy Riot, who performed an anti-Kremlin song in a cathedral in Moscow in 2012. Five band members participated in the performance, but only three have been identified so far.

Boiko-Veliky’s fortune was in 2007 estimated by Finans business weekly at 3.5 billion rubles ($110 million).

Ruzskoye Moloko company, part of his Your Own Financial Caretaker holding, supplies dairy goods to the presidential administration. In 2010, then-Prime Minister Vladimir Putin and then-President Dmitry Medvedev - the two have since switched roles - sampled the company’s milk at an agricultural fair.

Still, the tycoon has not always managed to stay on the right side of the law. Boiko-Veliky, who was expelled from the Komsomol communist youth league in Soviet times over his religious beliefs, spent 20 months in custody in 2007-2008, pending investigations over a suspect land deal. He was released on bail and the case is ongoing.