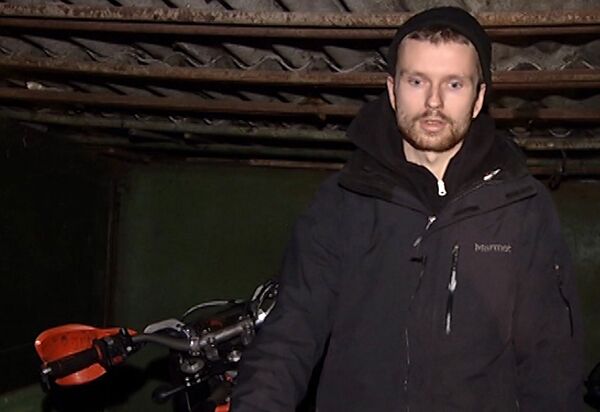 A daredevil motorcycle stunt ride through a Moscow metro station could end with prison time, after the biker was arrested on charges of hooliganism.

MOSCOW, October 3 (RIA Novosti) - A daredevil motorcycle stunt ride through a Moscow metro station could end with prison time, after the biker was arrested on charges of hooliganism.

Investigators said Thursday that the man, identified as Pavel Volkov, was detained earlier this week and could face up to five years in jail for the charge.

Video footage of the stunt, which appears to have been performed sometime in September, became a viral hit after being posted online.

The clip shows the helmet-wearing motorcyclist entering Moscow's Voikovskaya metro station and riding down the stairs, along the platform and back out the exit at the opposite end, all at considerable speed. Nobody was injured in the stunt.

Russian tabloid LifeNews, which posted the video on its website, ran what is said was an interview with the rider, who initially identified himself as Stepan.

The man interviewed says the stunt was planned for after midnight, when the metro is relatively empty, to avoid injuries to bystanders.
Voikovskaya was an ideal choice of metro station, as the lack of turnstiles made entrance easier, the man told LifeNews.

The Tverskoi Court of Moscow ruled on Thursday to place Volkov under a house arrest until the final verdict is announced in his case.
Television station NTV, meanwhile, quoted the biker as apologizing to anybody that might have been disturbed by the stunt, as well as to police officers and Voikovskaya station personnel.

Updated to include biker's name