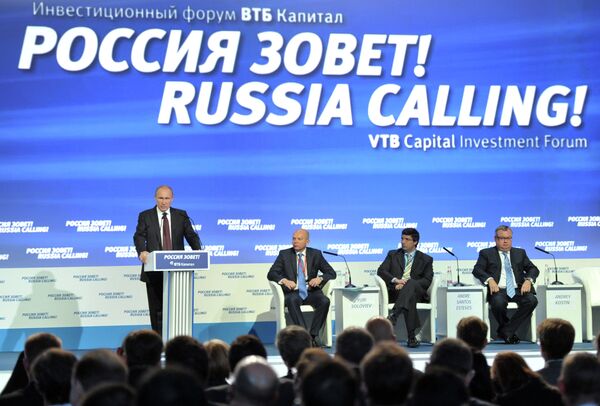 Foreign direct investment in Russia’s economy in the first six months of this year reached nearly $55 billion, three times more than in the first half of last year, President Vladimir Putin told an investment forum Wednesday.

But while the president praised foreign interest in the national economy, he skimmed over the issues of capital flight and dwindling macroeconomic growth.

As a positive example of large-scale foreign collaboration, Putin highlighted a deal between the government’s Russian Direct Investment Fund (RDIF) and Abu Dhabi’s state-owned Mubadala Development Company to invest up to $5 billion in Russian infrastructure.

“Special attention will be given to the creation of convenient [financial] instruments and to enhancing trust in the banking and financial sector,” he added.

However, Putin did not mention that Russia’s GDP in the first eight months of this year grew a meager 1.5 percent year-on-year and the seasonally adjusted month-to-month growth was basically zero, according to figures provided days earlier by Economic Development Minister Alexei Ulyukayev.

“There are no visible signs of change for the better,” Ulyukayev said Saturday at an international investment forum in Sochi. He urged Russians to prepare for a worsening unemployment situation due to economic stagnation.

Unemployment is expected to reach 6 percent next year, Ulyukayev said. The current unemployment rate is slightly above 5 percent.

In February, the Central Bank’s then-chief Sergei Ignatyev made headlines when he claimed that a small group of well-connected individuals was responsible for almost half of Russia’s capital flight, which he estimated at $49 billion over the previous year.