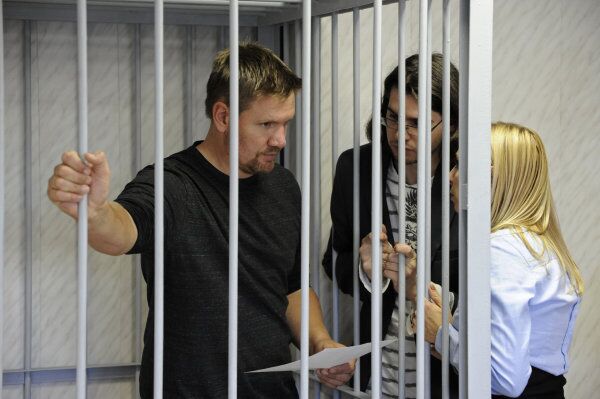 Dozens of state lawmakers in Maine have appealed to the Russian government to free the crew of a Greenpeace ship and its captain, who has ties to the state, currently facing piracy charges following a protest near a Gazprom oil rig in Arctic waters, local media reported Tuesday.

WASHINGTON, October 1 (RIA Novosti) – Dozens of state lawmakers in Maine have appealed to the Russian government to free the crew of a Greenpeace ship and its captain, who has ties to the state, currently facing piracy charges following a protest near a Gazprom oil rig in Arctic waters, local media reported Tuesday.

“We deeply object to the continued detention of these peaceful protesters in your country without any charges being filed against them,” the 41 Maine lawmakers wrote in their petition, the Portsmouth Herald reported. “We ask that they be released immediately.”

Among the signatories was state legislator Deane Rykerson, a friend of the captain of the Greenpeace icebreaker Arctic Sunrise, Peter Willcox, who is married to a woman from the island of Islesboro off of Maine’s coast, the Herald reported.

Rykerson, an architect, met Willcox in the 1970s when they worked together on a ship launched by legendary American folk singer and environmental activist Pete Seeger and built a bunk for his friend on another Greenpeace ship that Willcox captained, according to the report.

The Arctic Sunrise’s 30 crewmembers, representing 19 different nationalities, were detained by Russian border guards who stormed the ship on Sept. 19, a day after two activists scaled the Gazprom rig in the Pechora Sea to protest the potential impact of drilling in the Arctic’s fragile ecosystem.

The Maine legislators wrote in their petition that they are “deeply troubled” about Russia’s capture of the Greenpeace activists, echoing a wave of condemnation from rights activists and governments across the globe.

If charged and convicted with piracy, the activists could face up to 15 years in prison.

Russia’s Investigative Committee said Monday that Greenpeace’s attempt to scale the Gazprom rig had posed a threat to the platform’s staff and constituted a crime.

The Arctic Sunrise violated the 500-meter (1,640-foot) safety zone around the rig, and the crew committed “unlawful activity” by trying to scale the platform, ignoring orders to desist and ramming a border guard boat, the committee said.

Greenpeace denied the accusations, saying the ship did not violate the safety zone and that the group’s inflatable boats had posed no threat to the platform, which is made to withstand icebergs.

Greenpeace and other environmental groups oppose drilling for oil in the Arctic because they say that it is currently impossible to sufficiently clean up potential oil spills in the region, and that such drilling cannot be economically viable without state subsidies.