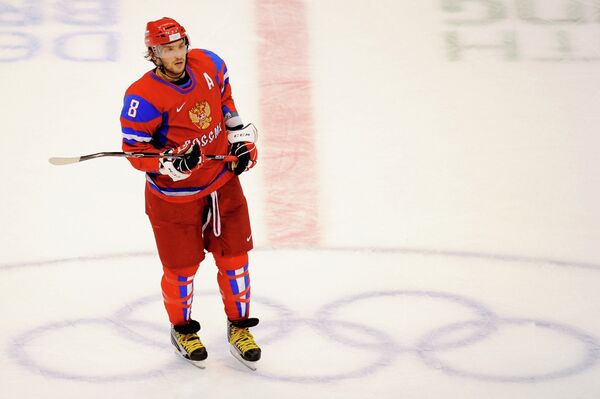 © Photo : Kevork Djansezian/Getty Images
Subscribe
Russian hockey star Alex Ovechkin said he does not believe gay athletes should be worried about their safety during the Sochi Winter Olympics next year in the wake of a controversial Russian law on homosexuality, National Public Radio reported Tuesday.

WASHINGTON, October 1 (RIA Novosti) – Russian hockey star Alex Ovechkin said he does not believe gay athletes should be worried about their safety during the Sochi Winter Olympics next year in the wake of a controversial Russian law on homosexuality, National Public Radio reported Tuesday.

“No, I don’t think so,” Ovechkin told the US radio broadcaster in response to a question about whether gay athletes should be concerned about being discriminated against or arrested during the games.

“To be honest with you, man, it’s just a situation when people there have rights. And I’m just hockey player,” he added. “I’m just support everybody and everybody have their own mind.”

Ovechkin, a superstar for the Washington Capitals of the National Hockey League (NHL), will be one of the most famous athletes to compete in Sochi as he seeks to lead the Russian national team to a gold medal for the host country.

Few prominent Russian athletes have spoken publicly about Russia’s law banning the promotion of “non-traditional relationships” to minors. Russian officials insist that the law, which has been criticized in Russia and abroad as targeting the Lesbian, Gay, Bisexual, and Transgender (LGBT) community, is designed to protect children and is not discriminatory.

Russian pole vault great Yelena Isinbayeva in August sparked a storm of fury throughout the global sports community when she expressed her support for the law, saying in non-native English that “if we will allow to promote and do all this stuff on the streets, we are very afraid for our nation.”

She later reframed her words simply as the desire to see local laws respected.

NPR said Tuesday that a Washington Capitals publicist had insisted prior to its interview with Ovechkin that the hockey star not be asked about Russia’s law on homosexuality.