Obama, Kerry Push and Pull in Rocky Year with Russia

Subscribe
US President Barack Obama and Secretary of State John Kerry have had sharp words for the Kremlin this year while at the same time couching their rhetoric in terms of cooperation and Realpolitik.

WASHINGTON, October 1 (RIA Novosti) – In an interview aired Sunday on the CBS television show “60 Minutes,” US Secretary of State John Kerry lauded Russia for its role in a landmark deal to eliminate Syria’s chemical weapons, which the UN Security Council approved last week.

The praise from America’s top diplomat comes in the wake of what has been a turbulent year in US-Russian ties over a range of issues, including the US Magnitsky Act sanctioning alleged Russian rights abusers and a Kremlin-backed law banning Americans from adopting Russian children.

During the course of the year, Kerry and US President Barack Obama have addressed these and other sticking points in bilateral relations with often critical comments of the Kremlin, but the two men tasked with directing US foreign policy have also consistently used the language of cooperation and Realpolitik in assessing Washington’s relationship with Moscow.

Here’s a rundown of quotes from Obama and Kerry this year illustrating this push-and-pull public diplomacy with Russia.

“The Russians made a huge difference here. We thank them and congratulate them. The Russians actually weighed in heavily with Assad, and he knew that one of his principal patrons was saying, ‘You’ve gotta do this.’”

“It is an insult to human reason – and to the legitimacy of this institution – to suggest that anyone other than the [Assad] regime carried out this attack.”

– Obama on claims – repeatedly put forth by top Russian officials – that an Aug. 21 chemical weapons attack outside Damascus was likely carried out by Syrian rebels to frame Assad. (Speech to UN General Assembly, Sept. 24) 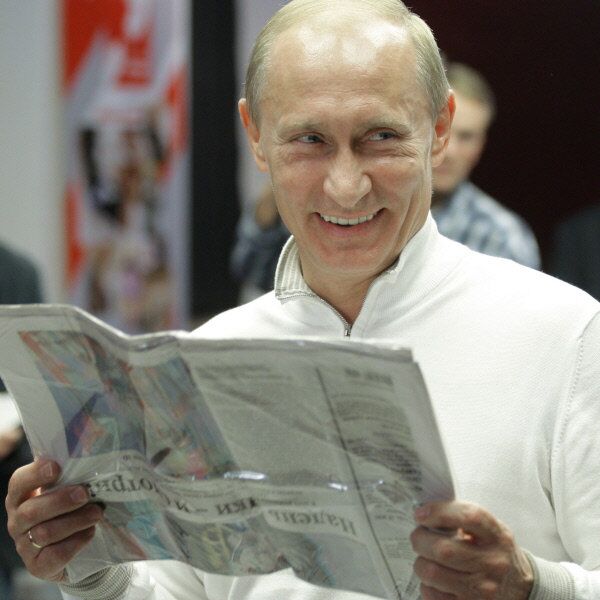 “I know the press likes to focus on body language and [Putin’s] got that kind of slouch, looking like the bored kid in the back of the classroom. But the truth is, is that when we’re in conversations together, oftentimes it’s very productive.”

– Obama on his relationship with Putin, who was reportedly angered by the comment. (White House press conference, Aug. 9)

– Obama on Putin’s ties to the feared Soviet state security agency, which Putin never led. While Putin served as a KGB officer, he only headed up its main Russian successor agency, the Federal Security Service, or FSB. (The Tonight Show With Jay Leno, Aug. 7)

Russian Law on Homosexuality and the Sochi Olympics

“If Russia wants to uphold the Olympic spirit, then every judgment should be made on the track, or in the swimming pool, or on the balance beam, and people’s sexual orientation shouldn’t have anything to do with it.”

– Obama on a controversial Russian law banning the promotion of “nontraditional” sexual relationships to minors, which critics call persecutory toward homosexuals, ahead of the 2014 Winter Olympics in Sochi. (The Tonight Show With Jay Leno, Aug. 7)

“Nobody is more offended than me by some of the anti-gay and lesbian legislation that you’ve been seeing in Russia. But as I said just this week, I’ve spoken out against that not just with respect to Russia but a number of other countries where we continue to do work with them.”

– Obama after explaining his opposition to a boycott of the Sochi Olympics over Russia’s law on homosexuality. (White House press conference, Aug. 9)

“I wonder if Mr. Snowden chose China and Russia as assistants in his flight from justice because they’re such powerful bastions of Internet freedom.”

– Kerry on fugitive US intelligence leaker Edward Snowden, who received temporary asylum in Russia after traveling from Hong Kong to Moscow in June. Washington consistently criticizes Russia and China for what it calls infringement on freedom of expression. (Press conference in India, June 24)

“There’s still a lot of business that we can do with them.”

– Obama answering a question about Russia’s decision to grant asylum to Snowden. (The Tonight Show With Jay Leno, Aug. 7)

“Have we gone down into a lower moment of that relationship? The answer is yes. And we have these fights over adoption, over Magnitsky, et cetera.”

– Kerry on bilateral tensions over the Magnitsky Act and a Russian law banning Americans from adopting Russian children. (Testimony before the House Foreign Affairs Committee, April 17)

“Even though there have been some bumps in the road, I am very hopeful that we can move this relationship back to a more visibly completely constructive place.”

– Kerry in the same hearing. (Testimony before the House Foreign Affairs Committee, April 17)

“The Russians have been very cooperative with us since the Boston bombing. Obviously, old habits die hard; there are still suspicions sometimes between our intelligence and law enforcement agencies that date back 10, 20, 30 years, back to the Cold War. But they’re continually improving.”

– Obama on Russian assistance in the investigation into the April 15 Boston Marathon bombing, which two brothers with roots in Russia’s restive North Caucasus region are accused of carrying out. (White House news conference, April 30)

“We just had a young person who went to Russia, Chechnya, who blew people up in Boston. So he didn’t stay where he went, but he learned something where he went and he came back with a willingness to kill people.”

– Kerry suggesting accused Boston bomber Tamerlan Tsarnaev, now deceased, was radicalized in Russia. Russian officials have downplayed Tsarnaev’s ties to Russia, saying that he and his brother Dzokhar, who has been charged in the attack, spent most of their lives outside the country. (News conference in Belgium, April 24)

“When President Putin … came back into power I think we saw more rhetoric on the Russian side that was anti-American, that played into some of the old stereotypes about the Cold War. … And I’ve encouraged Mr. Putin to think forward as opposed to backwards on those issues – with mixed success.”

“Russia has helped on a number of different things that are critical to us, and people should not overlook them.”

– Kerry (testimony to the Senate Foreign Relations Committee during his confirmation hearing, Jan. 24).