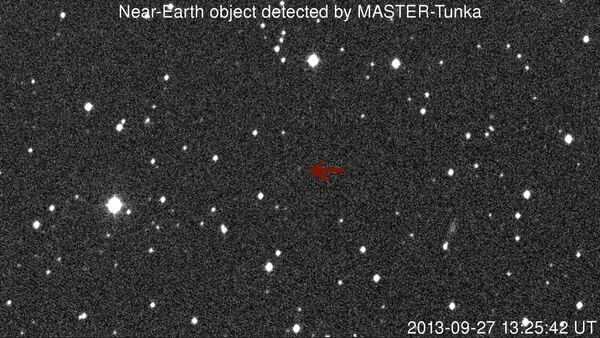 A 15-meter (approximately 50 feet) asteroid, similar to the one that exploded above Russia in February, was detected hours before it nearly missed the Earth over the weekend, Russian scientists said.

MOSCOW, September 30 (RIA Novosti) – A 15-meter (approximately 50 feet) asteroid, similar to the one that exploded above Russia in February, was detected hours before it narrowly missed the Earth over the weekend, Russian scientists said.

Vladimir Lipunov of the Moscow State University and the Sternberg Astronomical Institute said on Sunday a network of telescopes operated by his team recorded a celestial body approaching the planet.

"[The asteroid] was discovered on Friday night by our station near Lake Baikal and nine hours later it flew within 11,300 kilometers of the Earth surface, below the orbit of geostationary satellites. It was about 15 meters in size,” he said.

The scientists originally thought that it could be a man-made object, such as a spent rocket booster, but rejected the idea when they couldn’t find a match in the space junk catalogue.

Lipunov said his team had notified the International Astronomical Union of their discovery, but it is yet to be confirmed.

A meteorite exploded on February 15 above the Urals city of Chelyabinsk. The meteorite weighed 10,000 tons prior to the explosion, according to expert estimates. About 1,500 people were injured in the blast, most of them by glass shattered by the shockwave.