Russia Gets Poor Marks for Wellbeing of its Elderly – Report 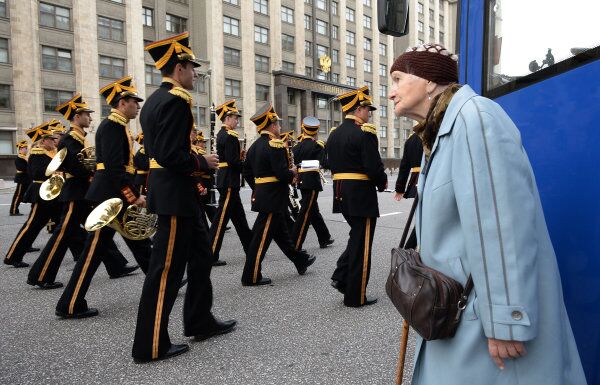 © RIA Novosti . Maxim Blinov
Subscribe
Russia earns low marks on a global index that rates countries by the quality of life and wellbeing of their old folk, ranking 78th out of 91 countries in the first-ever Global AgeWatch Index released Monday.

WASHINGTON, September 30 (by Karin Zeitvogel for RIA Novosti) - Russia earns low marks on a global index that rates countries by the quality of life and wellbeing of their old folk, ranking 78th out of 91 countries in the first-ever Global AgeWatch Index released Monday.

The index, which lists Sweden at number one and Afghanistan at rock bottom, ranks countries’ performances in the domains of income security; health status, including psychological wellbeing and life expectancy; employment and education; and what’s called the “enabling environment,” which measures how socially connected older people feel, whether they have easy access to transportation, how safe they feel, and their level of civic freedoms.

It was on the enabling environment that Russia stumbled badly, ranking 90th out of 91 countries, with only Pakistan scoring worse, Silvia Stefanoni, chief executive of senior citizens’ advocacy group HelpAge International, which put together the index with support from the United Nations Fund for Population and Development (UNFPA), told RIA Novosti.

In particular, social connections – whether older people felt they could rely on a friend or relative, for example, if they had a problem – “scored very low in Russia,” Stefanoni said, adding that Russia also received below-average marks for health status, ranking 78th out of 91.

The poor health ranking was due largely to the fact that life expectancy in Russia is only 69, or 15 years less than what the index calls “the current norm,” and healthy life expectancy, or the number of years a person can expect to live without disability or severe illness, is only 58 years in Russia.

Even though Russia’s economy is growing, older Russians are also “poor compared to other members of the population,” Stefanoni said as she explained why Russia ranked only 69th in income security.

But all was not doom and gloom for Russia’s elderly, she said.

“There have been very encouraging signs recently, like an increase in the value of the pension” paid to older Russians by the state, she said.

And in the employment and education criterion, Russia ranked 21st “because many older people in Russia are highly educated,” Stefanoni said.

HelpAge International used internationally comparable data gathered by organizations including the World Bank and Gallup polling agency to compile the Global AgeWatch Index, which the advocacy group hopes will spur debate about the needs of the world’s ageing population and give countries benchmarks to compare themselves to as they devise policies for their seniors.

Russia needs to pay attention to its old folk, Stefanoni said, noting that the proportion of older people in the Russian population is expected to jump from 19 percent today to nearly 31 percent by 2050.

Countries for Russia to emulate include Sweden, which sits at the top of the index because of “its social policy across life, which means older people get into later life with health and other social policies, like a universal pension, that help them to age better,” Stefanoni said.

The United States, which ranked eighth overall, was also a good model, ranking second behind Norway for education and employment, and 16th for its enabling environment (the Netherlands was top of the list in that category).

But Americans did not do so well on income security, where they ranked a comparatively poor 36th, “which for a very wealth country is not that high,” Stefanoni said.