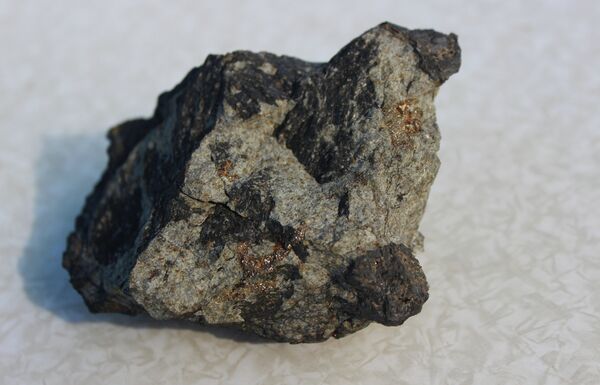 © Photo : Aleut
/
Go to the photo bank
Subscribe
The biggest commercially available piece of the celestial body that blew up over the Russian city of Chelyabinsk in mid-February went on sale this week for a modest but firm price of 2.1 million rubles ($65,000).

YEKATERINBURG/MOSCOW, September 29 (RIA Novosti) – The biggest commercially available piece of the celestial body that blew up over the Russian city of Chelyabinsk in mid-February went on sale this week for a modest but firm price of 2.1 million rubles ($65,000).

The charred heavenly stone, offered at the classified ads site Avito.ru with the slogan “a serious meteorite for serious people,” weighs 3.36 kilograms (7.4 pounds). It was certified by the Chelyabinsk State University to be, indeed, a meteorite shard and not just a lump of earthly dirt.

The owner, Alexei Usenkov, embarked on a search expedition in the meteorite’s wake, personally discovering this and dozens of other, smaller meteorite chunks, which he distributed to friends and relations, local news website 1obl.ru said.

Usenkov wanted to keep his biggest find or hand it over to a museum, but caved in after learning that the ongoing operation to fish out other chunks of the Chelyabinsk meteorite from the local Lake Chebarkul in the Urals is about to yield space rocks bigger than his.

“I think it may serve as a symbol for some Chelyabinsk mall,” Usenkov told RIA Novosti, speaking about his offer.

The space rock was still on sale as of this article’s publication. Usenkov said he hoped to find a buyer before the first anniversary of the meteorite’s passing on February 15 and buy a new apartment with the money.

The meteorite weighed 10,000 tons prior to the explosion, according to expert estimates. About 1,500 people were injured in the blast, most of them by glass shattered by the shockwave.

A sect has spawned in Chelyabinsk worshipping the meteorite, which, members claim, bears certain messages for mankind that would usher in a new age on Earth. It remained immediately unclear whether the sect – which has previously staged peaceful protests against the search operation in Lake Chebarkul – was interested in Usenkov’s piece of the meteorite.