Russians Less Positive About Putin Than 5 Years Ago - Poll 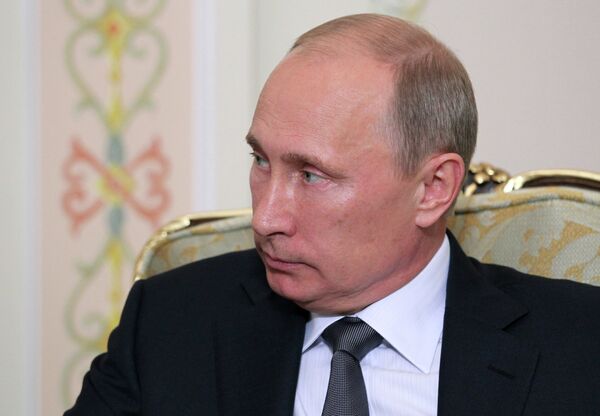 © RIA Novosti . Mikhail Klementiev
/
Go to the photo bank
Subscribe
The number of Russians who have a positive opinion about president Vladimir Putin dropped by 33 percentage points in the past five years, an opinion poll showed on Friday.

MOSCOW, September 28 (RIA Novosti) – The number of Russians who have a positive opinion about president Vladimir Putin dropped by 33 percentage points in the past five years, an opinion poll showed on Friday.

According to a survey, conducted by the respected independent Russian pollster Levada Center, the number of those whose opinion of Putin is “largely positive” declined from 80 percent in 2008 to 47 percent this year, the lowest ever since Levada first conducted a similar poll in 2001.

The number of respondents who have a “largely negative” opinion of Putin grew from 10 percent in 2008 to 27 percent in 2013.

The number of those who support Putin’s actions has also declined, from 77 percent in 2008 to 44 percent this year.

However, Putin still enjoys confidence of more than a half of Russians: although only eight percent said they had an “absolute confidence” in the president, nearly half of respondents (or 49 percent) said they tend to trust him.

At the same time, ten percent of respondents said Putin is “undoubtedly guilty” of what he is being accused by his political opponents, while 42 percent said he is “most likely guilty, like all high-ranking officials, but I don’t have enough information” to be certain.

Russians make the president personally responsible both for Russia’s recent achievements and setbacks.

At the same time, 58 percent said Putin was personally responsible for the country’s problems and the soaring of the cost of living. Multiple options were allowed, and other popular answers were the government (26 percent), Medvedev (36 percent), governors (19 percent) and businessmen (nine percent).