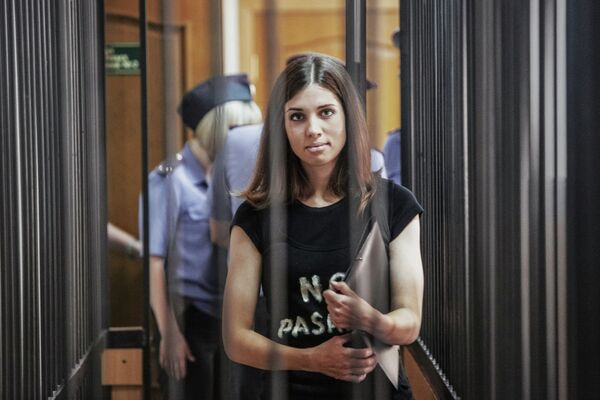 A Pussy Riot rocker on hunger strike over allegedly horrendous prison conditions has been hospitalized, Russia’s penitentiary service said Friday, hours after it was announced that her prison transfer request had been denied.

MOSCOW, September 27 (RIA Novosti) – A Pussy Riot rocker on hunger strike over allegedly horrendous prison conditions has been hospitalized, Russia’s penitentiary service said Friday, hours after it was announced that her prison transfer request had been denied.

Nadezhda Tolokonnikova, serving a two-year sentence over a so-called punk prayer protest in Moscow’s main cathedral last year, has been placed in the medical ward of her Mordovian penal colony “on doctors’ orders,” the penitentiary service told RIA Novosti.

Tolokonnikova, 23, announced her hunger strike earlier this week. In an open letter published by news site Lenta.ru, she harshly criticized the prison’s labor and sanitary conditions and claimed that a vice warden had threatened her life.

Her lawyer, Dmitry Dinze, said Friday that a request for Tolokonnikova to be transferred to a different prison had been denied. That same day a local official announced that the prison did not support her request for early release, an issue to later be decided in court.

Prison authorities have said Tolokonnikova went on hunger strike as blackmail after she was denied privileged treatment. The only sustenance that Tolokonnikova has allowed herself on her now five-day strike is water.

On Wednesday, Russian media quoted her husband, Pyotr Verzilov, as saying a guard had taken away Tolokonnikova’s drinking water and allegedly grabbed her by the arms without letting go.

A penitentiary service representative denied those claims on Friday, telling RIA Novosti that doctors had recommended that Tolokonnikova’s water simply be changed to warm water, and that physical force had not been used against her.

Tolokonnikova, to be released in March 2014, was convicted in February 2012 along with fellow Pussy Riot members Maria Alyokhina and Yekaterina Samutsevich.

On Thursday a Moscow court postponed a hearing to decide whether Alyokhina should be released early. Samutsevich was initially convicted alongside Alyokina and Tolokonnikova but was released early.