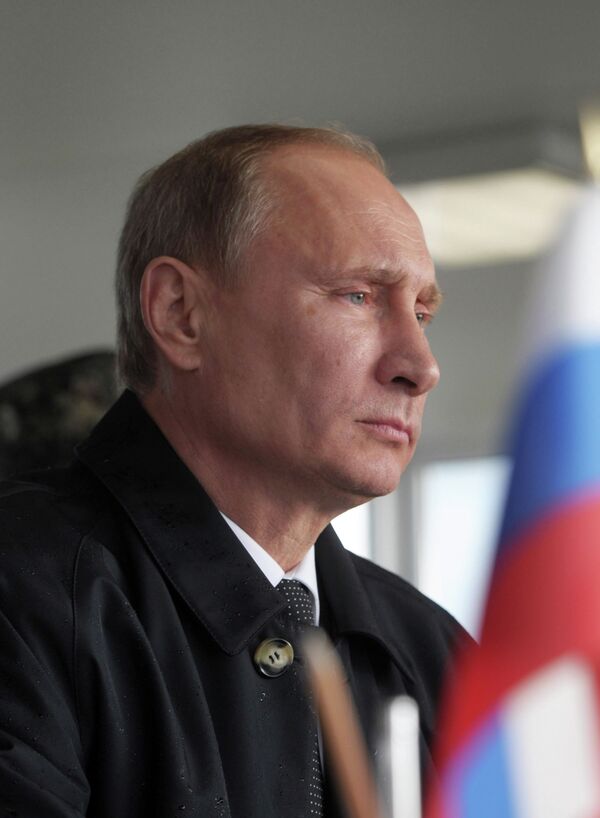 © RIA Novosti . Alexey Druzhinin
/
Go to the photo bank
Subscribe
Russian President Vladimir Putin complimented troops for their teamwork on Thursday after the conclusion of an extensive Russian-Belarusian military exercise that he called an integral step in ensuring defense of the two nations.

KHMELEVKA, Kaliningrad Region, September 26 (RIA Novosti) – Russian President Vladimir Putin complimented troops for their teamwork on Thursday after the conclusion of an extensive Russian-Belarusian military exercise that he called an integral step in ensuring defense of the two nations.

“The troops have demonstrated a sufficiently high degree of coordination and worked smoothly together in solving the practice-combat tasks,” he said. The six-day exercise, codenamed Zapad (West), has been held every two years since 2009.

Putin noted that this year’s event focused heavily on combat training, with five snap inspections of troops included in the activities.

“We have been presented with a real picture of the condition of the armed forces and their combat potential,” Putin said, adding that the results of the exercise would be used to guide the development of the Russian military.

Putin and his Belarusian counterpart, Alexander Lukashenko, had arrived in the same helicopter earlier in the day at a testing range on the Baltic Sea coast, a few miles north of Baltiisk, the main base of Russia’s Baltic Fleet.

Lukashenko was accompanied by his youngest son, Nikolai, dressed in military uniform.

This year’s exercise had about 12,000 Russian and 200 Belarusian servicemen, 180 combat vehicles, including 10 tanks, as well as 10 ships from Russia’s Baltic Fleet and 40 aircraft.

The exercise was to end with an operation to airdrop about 100 paratroopers and six BMD-2 airborne fighting vehicles, but it was cancelled due to “extremely unfavorable weather conditions,” said Col. Gen. Vladimir Shamanov, commander of the Airborne Forces.

“Personnel and equipment were ready for airdropping, but the supreme commander-in-chief, who was overseeing the exercises, made the decision to cancel it for security reasons,” Shamanov said.