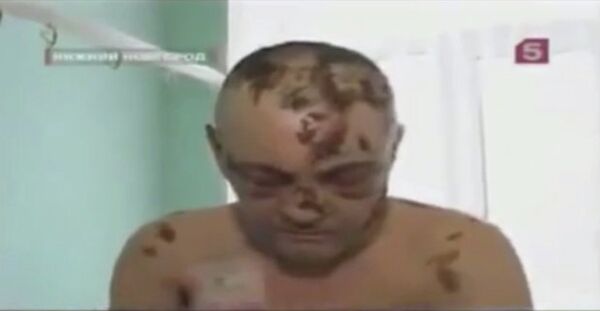 US doctors say the first cases of people using a notorious Russian street drug that eats away at the flesh have been reported in the United States.

WASHINGTON, September 26 (RIA Novosti) – US doctors say the first cases of people using a notorious Russian street drug that eats away at the flesh have been reported in the United States.

“We’ve had two cases this past week that have occurred in Arizona,” Dr. Frank LoVecchio of the Banner Poison Control Center told KLTV television this week. “As far as I know, these are the first cases in the United States that are reported. So we’re extremely frightened.”

The drug is known in Russia as “krokodil” or “crocodile,” because its gangrenous effect can cause the skin of users to resemble that of a crocodile.

Used widely in Russia for its strong sedative effects in lieu of heroin, crocodile has been the focus of efforts by Russian authorities in recent years to stem the spread of pharmaceuticals containing codeine, an opiate that is the key ingredient in the illicit substance.

Crocodile is produced by combining codeine with readily available industrial solvents and chemicals, such as paint thinner, oil or gasoline, a process similar to that used to create methamphetamine.

It is then used intravenously and can cause the flesh to rot from the inside out at the site of the injection.

“They extract [the drug] and even though they believe that most of the oil and gasoline is gone, there is still remnants of it,” LoVecchio said. “You can imagine just injecting a little bit of it into your veins can cause a lot of damage.”

LoVecchio declined to comment on the condition of the patients but said the two cases are linked, KLTV reported.

Aaron Skolnik, a toxicologist at Banner Health in Phoenix, told KSAZ television that the medical community is worried that crocodile use could spread, citing “horrific pictures from Russia that show skin literally falling off the bone.”

“This is something we hoped would never make it to the US because it’s so detrimental to the people who use it,” Skolnik said.

Use of crocodile in Russia is generally believed to have begun spreading about a decade ago, and by 2011, Russian authorities estimated the number of users at around 250,000.

Viktor Ivanov, head of Russia’s Federal Drug Control Service, said in January that the government had notched significant successes in curbing crocodile use by cracking down on the distribution of prescription drugs containing codeine that are used to produce crocodile.

The number of adults who inject drugs (mainly heroin) in Russia rose by more than 500,000 between 2008 and 2011, according to a UN report released in June.

While the availability of heroin has decreased in Russia, users there have found a “partial replacement with local and readily available substances,” such as desomorphine, the medical name for crocodile, according to the report.