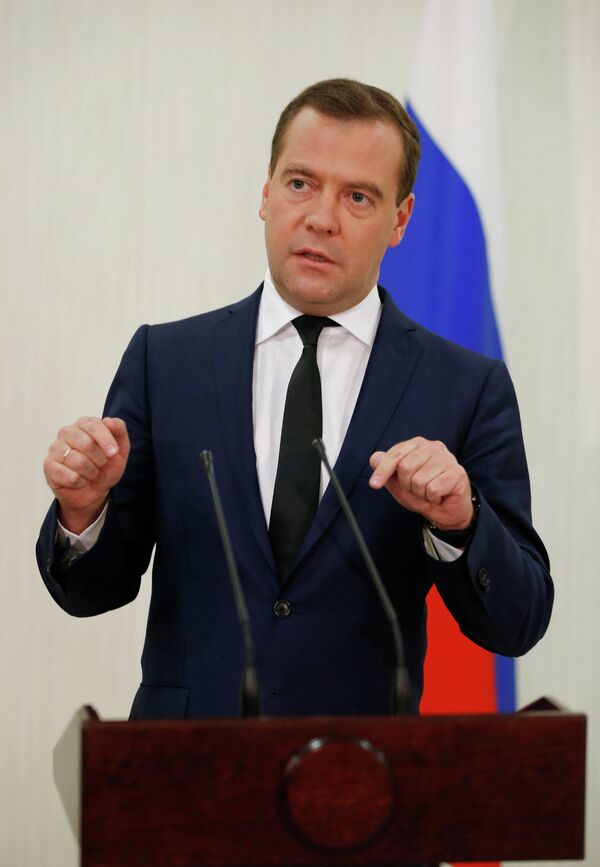 © RIA Novosti . Dmitry Astahov
/
Go to the photo bank
Subscribe
It would not be a catastrophe for Russia if Ukraine signs an association agreement with the European Union, but it would reduce the scale of economic cooperation between Moscow and Kiev, Russian Prime Minister Dmitry Medvedev said Wednesday.

ASTANA, September 25 (RIA Novosti) – It would not be a catastrophe for Russia if Ukraine signs an association agreement with the European Union, but it would reduce the scale of economic cooperation between Moscow and Kiev, Russian Prime Minister Dmitry Medvedev said Wednesday.

Ukraine plans to sign the EU deal, which includes a free-trade agreement, in late November. Moscow has warned Kiev that it might have to take protective measures to prevent the re-exportation of European goods from Ukraine to Russia.

“There will be no catastrophe after the signing of the agreement with the EU. We will continue our collaboration, but the extent of [bilateral] economic cooperation will be reduced,” Medvedev said after a Eurasian economic council meeting in Astana.

Medvedev warned that the signing of the EU agreement would most likely bar Ukraine from joining the Customs Union, although Kiev would still be able to remain an observer.

Ukrainian Prime Minister Mykola Azarov, who met with Medvedev in Astana on Wednesday, told reporters after the meeting that World Trade Organization rules provide plenty of opportunities to regulate potential re-exportation and other controversial issues raised by the Russian side.

He also said the Ukrainian government had analyzed 80 core agreements under the Customs Union and decided that Kiev could join about 70 of them.

Azarov added that Ukraine was ready to assess potential risks associated with the EU deal in transparent discussions with all Customs Union members.