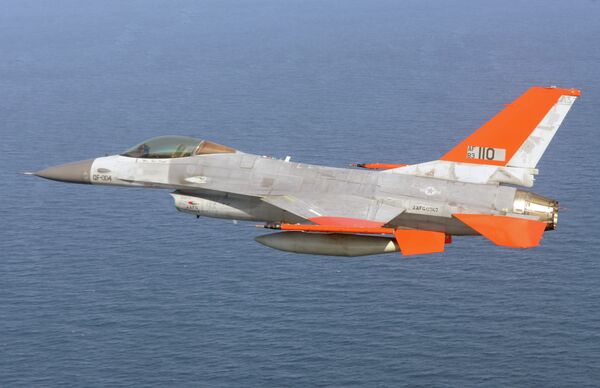 © USAF MSgt J. Scott Wilcox
Subscribe
Where do old fighter jets go to die? Turns out, some of them don’t. They just drone on. In a joint project with the US Air Force, aerospace and defense corporation Boeing is turning retired F-16s into pilotless drones that can be used for military combat training and testing.

WASHINGTON, September 25 (RIA Novosti) – Where do old fighter jets go to die? Turns out, some of them don’t. They just drone on.

In a joint project with the US Air Force, aerospace and defense corporation Boeing is turning retired F-16s into pilotless drones that can be used for military combat training and testing.

From the Tyndall Air Force Base in Florida last week, two Air Force test pilots on the ground flew a reconfigured F-16 on a 54-minute remote-controlled flight that included an auto takeoff, a climb to 40,000 feet (12,192 meters), a series of maneuvers, supersonic flight, and an auto land… all done without anyone on board.

“It was a little different to see an F-16 take off without anyone in it, but it was a great flight all the way around,” said Lt. Col. Ryan Inman, Commander of the 82nd Aerial Targets Squadron (ATRS), which is expected to use the remodeled aircraft for training once further testing has been completed.

“Now we have a mission capable, highly sustainable, full-scale aerial target to take us into the future,” he added in a Boeing press release.

After all the normal preflight checks were done, control was turned over to Thomas Mudge, an 82nd ATRS pilot controller, who was sitting in a control room on the opposite side of the base to conduct the test.

"The flight itself went very well," Mudge told US Air Force News, adding, "Its performance and abilities are great and we're looking forward to this airplane."

The test run on Sept. 19 marks the first full-scale, unmanned retrofitted F-16 flight, a critical step in the first phase of a plan to eventually deliver up to 126 of the drones to the Tyndall base.

Under a $72 million, 28-month contract, Boeing is converting six of the old F-16s into drones, some of which will be used in the next phase of the project, which involves live fire tests.