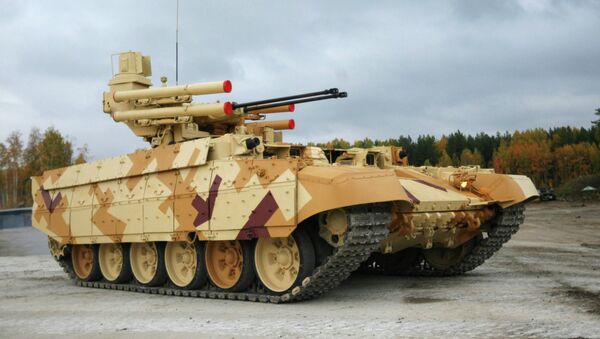 The BMPT-72 is an extensive modernization of the world-famous T-72 main battle tank, also produced by Uralvagonzavod. Compared with its predecessor – the BMPT – the BMPT-72 has an improved fire control system and better turret weapon station protection.

“The key advantage that the BMPT-72 gives to all the counties that operate T-72 tanks is that they can promptly and at minimal cost upgrade their armies to an ultra-modern level, and enhance capacity, mobility, protection and armament without purchasing new high-cost machines,” Uralvgonzavod said in press release prior to the Nizhny Tagil show.

Russian Deputy Prime Minister Dmitry Rogozin said Wednesday that the idea to build new heavily armed tank support vehicles emerged on the basis of experience acquired by the Russian military during the First Chechen War in North Caucasus, especially during the urban fighting in Grozny in 1995 when Russian troops lost a large number of combat vehicles to “guerrilla warfare” tactics used by Chechen separatists.

Rogozin, who oversees the Russian defense and space industries, said future versions of the BMPT would most likely be based on the platform of Russia’s highly anticipated new main battle tank: the Armata.