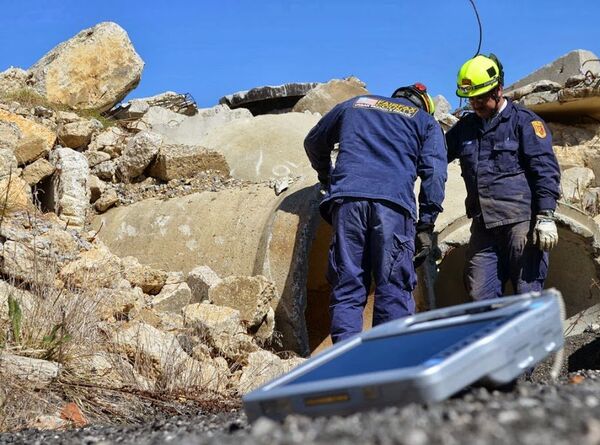 © RIA Novosti . K. Zeitvogel
Subscribe
NASA takes the remote-sensing radar technology it uses to monitor where spacecraft are and packages it in a portable, suitcase-sized package to give it a new, earthly purpose: helping rescue workers detect a human heartbeat buried deep beneath rubble at a disaster site.

LORTON, Virginia, September 25 (by Karin Zeitvogel for RIA Novosti) – There were no cries for help coming from beneath the piles of concrete where a building once stood, just an eerie silence and the sounds of gravel crunching underfoot as rescue workers Mark Lucas and Samuel Sandeen walked up and down the disaster site on the outskirts of this Virginia town, looking for signs of life.

Then, a faint “beep” came from the small metallic suitcase they were wheeling up and down near the mounds of crumpled concrete, and a small computer screen lit up and indicated that underneath the rubble and dust, there was a human heartbeat.

Within minutes, the rescuers from Fairfax County Fire and Rescue, who have taken part in search and rescue operations in Armenia, Kyrgyzstan, Haiti, and the Pentagon after the 9/11 terror attack, had pulled Rachel Horwitz from the rubble.

Happily, this was just a test to demonstrate a new radar device that goes by the acronym FINDER, which stands for Finding Individuals of Disaster and Emergency Response, and is based on remote-sensing radar technology developed by NASA's Jet Propulsion Laboratory (JPL) in Pasadena, California, to monitor the location of spacecraft.

Unlike other rescue tools, like sniffer dogs and heat-detecting devices, FINDER picks up the heartbeats and breathing of victims by beaming a low-power microwave signal – less than 1/100th of what a mobile phone emits – onto the target area that rescuers are focusing on, such as a building that’s collapsed in an earthquake. 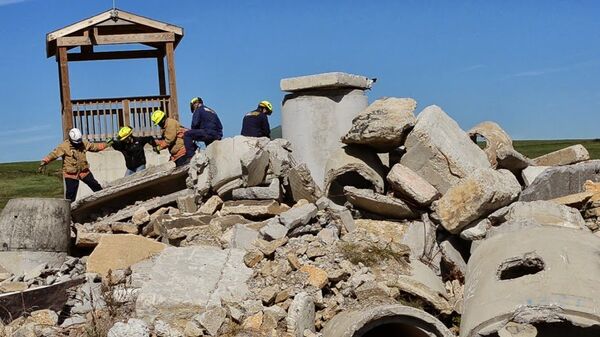 Fire and rescue workers help a woman from beneath rubble at an event to demonstrate the FINDER.
© RIA Novosti . K. Zeitvogel

The microwave signal penetrates into the rubble and reflects off what’s inside, namely lots of rubble and any survivors, and bounces back to the suitcase that contains FINDER’s computer brain.

“If the victim is breathing and their heart is beating, their skin moves just a little bit and we can detect that movement,” Lux said.

The technology behind the FINDER is not new, but the portability of the device that helped to find Horwitz under the rubble is.

“The basic technique of detecting people using microwaves has been around at least 40 years but this is the first time that somebody’s put together a system that’s portable and usable by first responders,” said Lux.

“You set the radar down in front of the rubble and push a little button on the controller, and in about 30 seconds, it tells you how many victims there are and what their heart rate and breathing rate are,” he said.

FINDER will not replace sniffer dogs and heat-detecting devices, but will be added to rescuers’ toolkits. It’s highly portable – one of the briefs that Lux was given was that it had to fit in the overhead compartment on an airplane –and its battery lasts for around 14 hours. FINDER will be particularly helpful in finding disaster victims who are unconscious, too weak, or too young to call out for help.

Development of the FINDER began last year, and the technology is still very much in the testing stage.

But already several manufacturers have expressed an interest to JPL to produce the carry-on luggage sized FINDER, and Lux said he expects it could come to market by the beginning of next year. It will probably cost around $10,000.

Not only could FINDER be used to search for victims in building collapses, but Lux also envisions FINDER being put to work at border crossings to track down people trying to illegally enter a country, to search for lost children, and find where hostages are being held.

“We can also distinguish some animals, so if biologists want to know how many bears go by a particular place in the forest, we could calibrate FINDER to detect bears instead of deer,” Lux said.

And, because FINDER was developed by NASA, the technology is expected to be used in space some day, to monitor astronauts’ vital signs without the need for wires.