Kerry Signs Arms Trade Treaty Despite Opposition in US 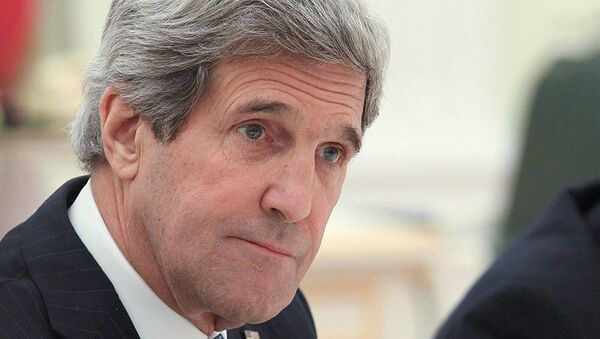 © Sputnik / Michael Klimentyev
Subscribe
US Secretary of State John Kerry signed the international Arms Trade Treaty (ATT) at the United Nations Wednesday, which regulates the global arms trade and is aimed at preventing conventional weapons from reaching human rights violators or conflict zones – but the measure is facing strong opposition on Capitol Hill where it has to be ratified by the US Senate.

WASHINGTON, September 25 (RIA Novosti) – US Secretary of State John Kerry signed the international Arms Trade Treaty (ATT) at the United Nations Wednesday, which regulates the global arms trade and is aimed at preventing conventional weapons from reaching human rights violators or conflict zones – but the measure is facing strong opposition on Capitol Hill where it has to be ratified by the US Senate.

“This is about keeping weapons out of the hands of terrorists and rogue actors. This is about reducing the risk of international transfers of conventional arms that will be used to carry out the world’s worst crimes,” said Kerry at the treaty signing ceremony.

“This treaty strengthens our security, builds global security without undermining the legitimate international trade in conventional arms which allows each country to provide for its own defense,” he added.

The US is one of 106 nations to sign the agreement, which requires participants to establish rules to control the export and import of tanks, combat vehicles and aircraft, warships, missile and artillery systems, small arms and light weapons, and to regulate arms brokers.

It has been ratified by six countries so far, and needs a total of 50 before it can go into effect.

But that is almost certain to be an uphill battle in Washington, where ratification requires approval from two-thirds of the Senate.

Gun rights activists in the US have expressed concern that the treaty would lead to expansions on gun control.

The Senate passed an amendment sponsored by Sen. Jim Inhofe in March to prevent the US from entering into the treaty.

“Not only would this treaty disrupt diplomatic and national security efforts, but it would also subject the United States to implement gun laws as required by the treaty instead of the national controls that are currently in place. The American people have spoken and it's time Sec. Kerry and the State Department put an end to ratifying this treaty,” Inhofe said in a statement at the time.

Inhofe said in a letter to Kerry this week he was “extremely disappointed” to learn that the US would be a signatory nation, and predicted the measure was already “dead in the water.”

“The UN should not be deceived into thinking the US will ratify a treaty just because it has been signed by the President or someone in his Administration” he added, and attached the names of the 53 US Senators who voted against the treaty in March.

“The Obama administration is once again demonstrating its contempt for our fundamental, individual Right to Keep and Bear Arms,” said Chris Cox, executive director of the Institute for Legislative Action at the National Rifle Association (NRA), in a statement Wednesday.

But Kerry said he was pleased to have signed the treaty because it would “make the world a safer place.”

“This treaty will not diminish anyone’s freedom. In fact, the treaty recognizes the freedom of both individuals and states to obtain, possess, and use arms for legitimate purposes," he said.

The agreement was adopted by the UN General Assembly in April, by a vote of 154 to 3. Russia was one of 23 countries that abstained from the vote, while Syria, Iran and North Korea voted against it.