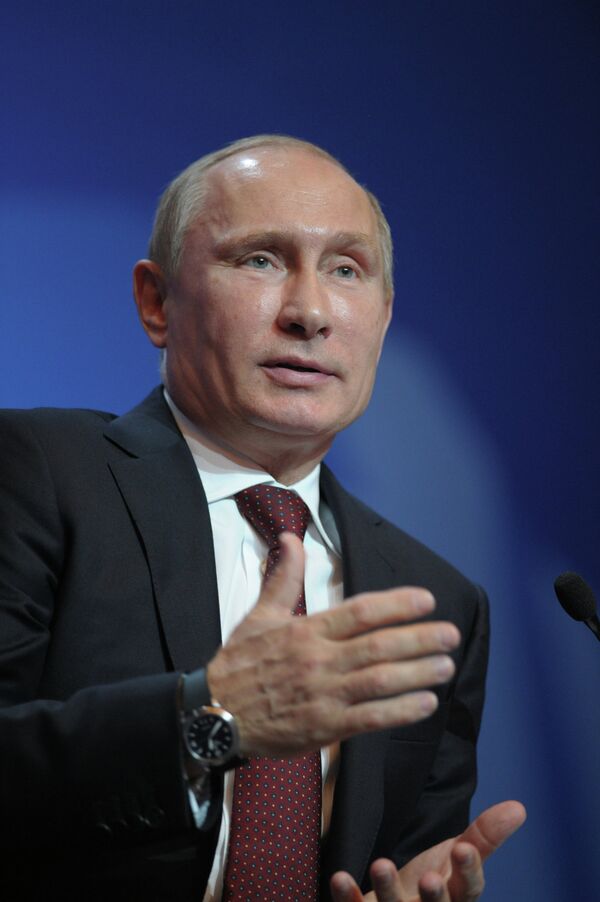 © RIA Novosti . Alexey Druzhinin
/
Go to the photo bank
Subscribe
Russian President Vladimir Putin weighed in Wednesday on the debate over the Greenpeace activists who were detained and face piracy charges after protesting at a Russian oil rig in the Arctic Ocean, criticizing their actions as dangerous.

MOSCOW, September 25 (RIA Novosti) − Russian President Vladimir Putin weighed in Wednesday on the debate over the Greenpeace activists who were detained and face piracy charges after protesting at a Russian oil rig in the Arctic Ocean, criticizing their actions as dangerous.

Speaking about the 30 detained Greenpeace activists at an international forum on Arctic exploration in the northern Russian city of Salekhard, Putin said it was “obvious they’re not pirates,” but added that they had been trying to seize the rig and authorities had responded with due concern for security.

“Our law enforcement authorities and border guards didn’t know who might be trying to seize the rig under the guise of Greenpeace activists,” Putin said in remarks televised by the state-run Rossia 24 television.

Russian border guards seized the Greenpeace icebreaker Arctic Sunrise and its multinational crew in international waters last Thursday after two of the activists scaled the side of the Prirazlomnaya oil rig in the Pechora Sea in a demonstration against Arctic oil drilling the day before.

The suspects face up to 15 years in prison under the piracy case opened by Russian investigators this week, which Greenpeace dismissed as absurd, saying that the protest was peaceful and that the border patrol had seized the Arctic Sunrise at gunpoint.

Although Putin dismissed the piracy allegations, he insisted the activists had violated existing legislation.

“It’s completely obvious that they breached international law by coming within dangerous proximity of the oil rig. There was a threat to people’s lives,” Putin said.

Putin drew attention to the timing of the incident, saying that “especially in light of the bloody events that were taking place in Kenya, it could have been anything.” However, the deadly terrorist attack on a Nairobi mall only began on Saturday, three days after the environmental activists scaled the oil rig.