Russian Football: CSKA Under Pressure to Bounce Back Against Anzhi 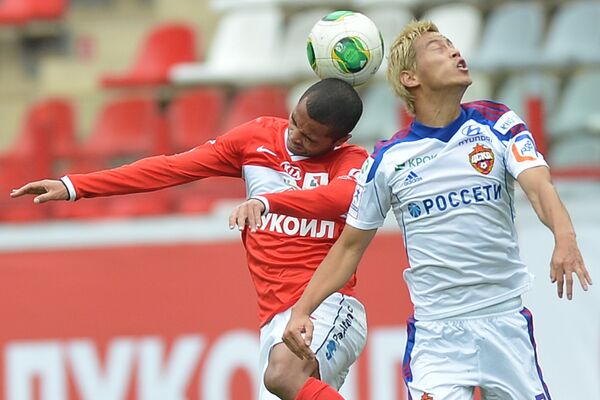 They started the season as championship rivals, but now the balance of power between CSKA Moscow and Anzhi Makhachkala is very different.

MOSCOW, September 24 (R-Sport) - They started the season as championship rivals, but now the balance of power between CSKA Moscow and Anzhi Makhachkala is very different.

CSKA remains in the Russian Premier League title race while Anzhi, no longer a big spender, has fallen by the wayside, but circumstances mean their encounter Wednesday has assumed crucial importance to both teams’ seasons.

Following 3-0 defeats to Bayern Munich and fierce rivals Spartak Moscow in the last week, reigning champion CSKA goes into Wednesday’s game knowing it needs a win if it's not to fall behind in the Rtitle race – CSKA is level on points at the top with Spartak and Zenit St. Petersburg.

Ever since Anzhi’s billionaire owner Suleiman Kerimov launched a fire sale of star players, the team from the Caucasus has been relegation contenders rather than championship chasers. Without a win in any of its 10 games this season, the team needs points to escape the drop zone.

CSKA has lacked a powerful striker ever since first-choice Seydou Doumbia got injured last month, and assistant coach Vitkor Onopko suggested Tuesday the club’s poor recent performances were just a lull before 10-million-euro Vitinho and two other young summer signings find their form.

“The new guys just need time to adapt,” said Onopko, who won 109 caps for Russia in his day. “All three of them have great futures ahead of them, and I’m sure they’ll help CSKA.”

The 19-year-old Vitinho especially is “a very gifted player” with “good acceleration,” but just needs to connect better with his teammates, Onopko said on the CSKA website.

While Doumbia is still unavailable, CSKA can recall Sweden midfielder Rasmus Elm after a month on the sidelines. Anzhi, meanwhile, is still smarting from a 2-1 loss to FC Volga on Sunday in which it had a goal disallowed in controversial circumstances – “the referee killed us,” forward Pavel Solomatin said.

The game will be played at Moscow’s dilapidated Eduard Streltsov Stadium because of the poor state of the pitch at CSKA’s usual home, Arena Khimki.

When CSKA takes to the field, it will already know what it must do to keep pace with Zenit and Spartak, both of which are in action earlier Wednesday.

Looming just one point behind the top three is Lokomotiv Moscow, resurgent this season after a disappointing ninth place last term. The Railwaymen may have benefited from some questionable refereeing decisions in their weekend 3-1 defeat of Dynamo Moscow, but they have still won five of their last six games, making them a fearsome prospect for newly promoted Ural Yekaterinburg on Thursday.

In other action, Rubin Kazan on Monday lost its top scorer Jose Salomon Rondon until at least December, and must start to cope without him when it hosts Dynamo on Thursday.

FC Kuban manager Dorinel Munteanu has performed well in the Europa League but has his team marooned in 11th in the Russian top flight, the cause for a vote of confidence from management Monday. A win at home to winless Terek Grozny on Wednesday would relieve some of the pressure.

FC Tomsk got its first win of the season at the weekend and will be sure of staying out of the relegation zone if it can beat Volga on Thursday, after which sixth-placed FC Rostov meets seventh-placed Amkar Perm.