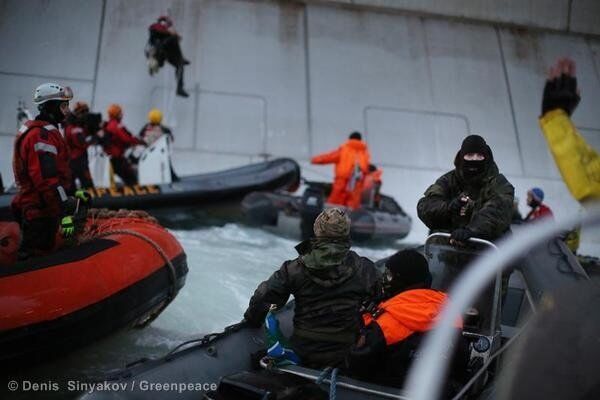 Russian authorities made good on earlier threats to pursue legal action against Greenpeace activists on Tuesday, opening a criminal case into piracy against environmental activists who staged a protest at a Gazprom offshore oil platform in the Arctic Ocean last week.

MOSCOW/MURMANSK, September 24 (RIA Novosti) – Russian authorities made good on earlier threats to pursue legal action against Greenpeace activists on Tuesday, opening a criminal case into piracy against environmental activists who staged a protest at a Gazprom offshore oil platform in the Arctic Ocean last week.

Russia’s Investigative Committee spokesman, Vladimir Markin, claimed that the environmental organization’s demonstration at the oil rig constituted piracy, and said in a statement on the committee’s website that “all perpetrators of the attack on the platform will be held liable, regardless of their nationality.”

Russian border guards seized the Greenpeace icebreaker Arctic Sunrise and its multinational crew in international waters last Thursday after detaining two Greenpeace activists – Finnish and Swiss nationals – who scaled the side of the Prirazlomnaya oil rig in the Pechora Sea in a demonstration against Arctic oil drilling the day before.

Greenpeace struck back against the news of the piracy case – a charge punishable by up to 15 years in prison – calling it absurd and contradictory to Russian law, and demanding the immediate release of its detained activists.

“Article 227 of the Criminal Code on piracy has three qualifying features: the capture of a vessel with the use of violence, for the purpose of appropriating someone else’s property,” Mikhail Kreindlin, a Greenpeace Russia campaigner and expert on environmental law, told RIA Novosti. He said that in this case, none of those three conditions were met, adding that Greenpeace is a non-violent organization.

Greenpeace said that the protest was peaceful and that the border patrol had seized the Arctic Sunrise at gunpoint in an unwarranted show of force. It maintains that the boarding of the Dutch-registered vessel was illegal under international law.

Russia's Federal Security Service reported that the border guards had fired warning shots to force the Arctic Sunrise to stop, but that the ship's captain had refused to obey the warning, leading to the vessel’s detainment.

The Arctic Sunrise, carrying a crew of about 30 Greenpeace activists, arrived in the Kola Bay this morning escorted by a tug boat and a Russian coast guard ship after being towed from the Pechora Sea over the past few days. The border guard service said the ship’s captain had refused to steer the vessel in protest after it was seized.

The icebreaker weighed anchor at Mishukovo – a village near Russia’s northern port city Murmansk – at about 1 p.m. Moscow time, according to the local border guard service.

Markin said investigators had already arrived in Murmansk and would “question all those involved in the incident, and detain the most active among them.”

"When a foreign vessel is full of electronic technical equipment of unknown purpose, and a group of individuals calling themselves members of environmental advocacy organizations are trying nothing less than to take a drilling platform by storm, legitimate doubts arise as to their intentions," Markin wrote.

Greenpeace representatives reported on the ship’s Twitter feed that diplomats representing the 18 countries – including the US, Canada, the UK, Ukraine and Russia – whose citizens were on the Arctic Sunrise were due to board the ship at 3 p.m. local time. After 6:30 p.m., Greenpeace confirmed to RIA Novosti that the diplomats had already been on board the ship and spoken to the activists, adding that still no formal charges have been filed.

The Arctic Sunrise crew has had no access to legal or consular assistance in the nearly five-day period since the ship was boarded, Greenpeace said. It claimed in a press release Tuesday that the organization still has not been provided with a legal basis for the raid.

A Greenpeace spokeswoman said that the organization’s lawyers have sent a formal request for case materials to the Investigative Committee.

“No one has provided any materials, so Greenpeace really doesn’t know what the activists are being accused of, and why they are still in detention,” Maria Favorskaya, a Greenpeace press secretary, told RIA Novosti. She said that the case evidence was necessary for the organization to be able to draw conclusions on how to proceed.

“Nothing to Do With Piracy”

The original incident that sparked the Greenpeace-Russia standoff and its ongoing development have elicited mixed reactions.

“I am against the kind of extreme measures Greenpeace used at the Prirazlomnaya [platform],” he told reporters on the sidelines of an international Arctic forum in Salekhard – a Russian city near the Arctic Circle – on Tuesday, adding that no oil and gas development in the Arctic is considered without environmental review.

Greenpeace and other environmental groups oppose drilling for oil in the Arctic because they say it is currently impossible to sufficiently clean up potential oil spills in the region, and that such drilling cannot be economically viable without state subsidies. The Prirazlomnaya platform is set to become the first oil drilling facility in the Arctic, with Gazprom planning to begin production there this year, according to its website.

“These accusations are foolish and stupid,” Voitenko, editor-in-chief of the Maritime Bulletin news website, said by phone Tuesday. “Russia’s actions against Greenpeace must be reasonable; maybe they could charge them with hooliganism or with trespassing. But this has nothing to do with piracy.”

Article 101 of the United Nations Convention on the Law of the Sea defines piracy as an “illegal act of violence or detention…committed for private ends by the crew…of a private ship and directed…against a ship, aircraft, persons or property in a place outside the jurisdiction of any state.”

Greenpeace occupied the same platform in August last year. Six activists scaled the side of the oil rig and dangled from it in harnesses for several hours, holding a banner reading, “Don’t Kill the Arctic,” but eventually left without facing any legal consequences.

Over 50 Russian NGOs, including the Russian branch of the World Wildlife Fund, have signed a joint statement calling for the activists’ release, Greenpeace said, and over 416,000 supporters of the organization have sent letters to Russian embassies around the world.

Updated with additional quotes, background detail, and developments throughout the day