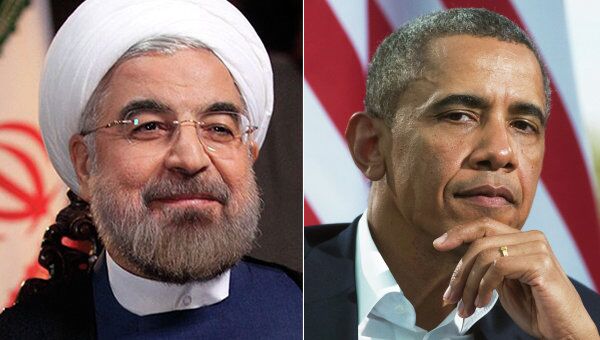 Iran’s newly elected president on Tuesday opted against a brief meeting with US President Barack Obama at the United Nations because it would be “too complicated” for the Iranians, a White House official said.

WASHINGTON, September 24 (RIA Novosti) – Iran’s newly elected president on Tuesday opted against a brief meeting with US President Barack Obama at the United Nations because it would be “too complicated” for the Iranians, a White House official said.

“The Iranians got back to us,” a senior Obama administration official said Tuesday. “It was clear that it was too complicated for them to do that at this time given their own dynamic back home.”

The White House had offered Iranian officials to arrange “a discussion” between Obama and Iranian President Hassan Rouhani on the sidelines of the UN General Assembly (UNGA) this week, the official said.

But formal negotiations between the two sides will be carried out between Secretary of State John Kerry and his Iranian counterpart during talks on Iran’s nuclear program this week that include the top diplomats from Russia, China, Britain, France and Germany.

Tehran and Washington severed diplomatic ties in 1979 following the overthrow of Iran’s US-backed leader by Islamic revolutionaries and have been locked in a stalemate for years over the Iranian government’s nuclear ambitions.

Rouhani, however, has made recent overtures indicating he is interested in greater engagement with the United States. In an op-ed published last week in The Washington Post, he suggested Iran would like to “move beyond impasses” in its relations with Washington.

Obama told a meeting of the UNGA in a speech Tuesday that he is interested in pursuing a diplomatic tack in trying to prevent Iran from obtaining a nuclear weapon, adding that Washington is “not seeking regime change” and respects “the right of the Iranian people to access peaceful nuclear energy.”