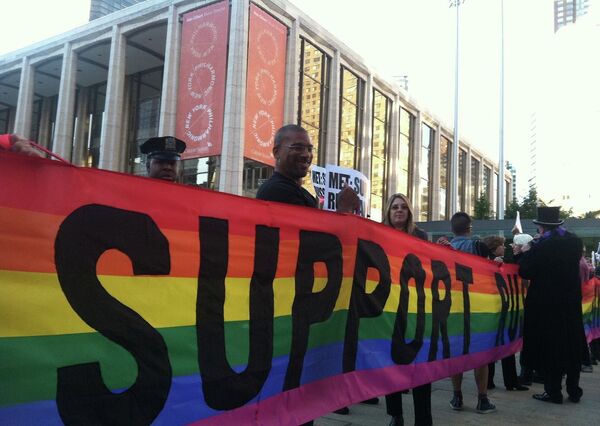 Gay rights protesters who raised their voices and disrupted the start of the New York Metropolitan Opera’s Russia-centric opening night gala on Monday were singing victory on Tuesday, and planning new ways to pressure high-profile Russian performers to speak out against their country’s controversial legislation on homosexuality.

WASHINGTON, September 24 (By Maria Young for RIA Novosti) – Gay rights protesters who raised their voices and disrupted the start of the New York Metropolitan Opera’s Russia-centric opening night gala on Monday were singing victory on Tuesday, and planning new ways to pressure high-profile Russian performers to speak out against their country’s controversial legislation on homosexuality.

“As we continue to press Russian artists who come to the US, and as we continue to pressure Russian public figures who come to the US, I think we will begin to see folks in Russia begin to question the wisdom of this law they have passed,” said Duncan Osborne, one of the protesters and a member of Queer Nation NY, a New York-based group that works to end discrimination against the Lesbian, Gay, Bisexual and Transgender (LGBT) community.

The season-opening gala is a cornerstone event for New York society and opera enthusiasts. But the performance of “Eugene Onegin,” written by famed Russian composer Pyotr Tchaikovsky, and performed by two Russian stars, was a tempting target for protesters.

The Monday night gay rights protest was aimed at world-famous Russian opera diva Anna Netrebko and renowned Russian conductor Valery Gergiev, both were headlining the opera at the Met and are supporters of President Vladimir Putin.

Patrons in black ties and sequined evening gowns were greeted outside the venue by what Queer Nation NY says was an estimated 150-200 chanting protesters passing out flyers, rainbow pins and holding a giant rainbow flag that has come to symbolize the gay rights movement.

Inside, “We wanted Netrebko and Gergiev to hear from us. We think they are important voices in Russia and we think it is morally incumbent upon them to speak out and oppose what the Russian government is doing,” said Osborne.

“Once security nabbed him, I jumped up… and I started bellowing, ‘Putin. Stop. End Your War on Russian Gays!’ over and over and over again. Because security was focused on Duncan… it took a very long time for them to regroup and come get me, so I enjoyed quite a bit of time making our point,” said Ken Kidd, another member of Queer Nation NY who took part in the protest and estimated it lasted about three minutes.

The point, protesters said, was to refute a controversial law signed by Putin earlier this year banning the promotion of non-traditional relationships to minors.

The Kremlin maintains the law does not prevent adults from making their own choices and is aimed at protecting children, critics claim the legislation is part of a much wider crackdown on Russia’s LGBT community.

“The Russian Ambassador was there last night, and I'm sure that through him and probably plenty of others, Putin personally got an earful and directly heard Duncan's and my voice. Imagine the impact Netrebko would have if she used her influence and celebrity and those same three minutes to say the same thing to Putin,” said Kidd.

The Met dismissed the impact of the protest in an email to RIA Novosti.

“The disruption last night consisted of two people seated in the family circle who chanted an anti-Putin message for approximately 45 seconds before the performance began,” said press manager Sam Neuman.

“The ushers asked them to leave and they did, along with their two companions. This was before the performance happened and any artists were onstage, so I am not even sure they were aware,” he added.

Neuman later told RIA Novosti that Gergiev conducted the US National Anthem immediately before the protest began, which Queer Nation said was music to its ears.

“Many LGBT Russians who are not powerful people, who are not wealthy people, have spoken out against these laws, and if those people can do it, Anna Netrebko and Valery Gergiev can do it as well,” said Osborne.

Other Russian performers and political figures can expect to hear from protesters at a broad range of upcoming events in the US, Duncan said, including the Moscow Ballet, scheduled to perform in New York in December, and conductor Yuri Temirkanov, scheduled to perform along with the St. Petersburg Philharmonic at New York’s Carnegie Hall in February.

The Russian Embassy in Washington declined a request for comment from RIA Novosti.

The Met protest is the latest in a string of protests over the legislation, including a push to boycott Russian vodka and other products, as well as the 2014 Winter Olympics in Sochi, concerns about the Miss Universe pageant scheduled to take place in Moscow in November, even a call from the American Kennel Club to move the 2016 World Dog Show out of Russia.

Protesters say they are already seeing signs of success, including public comments on the issue from Putin and US President Barack Obama, attention from the International Olympic Committee, and QueerFest2013, an LGBT festival taking place in Russia this week that is aimed at promoting tolerance.

“It is notable to me that they were visited by the police, and the police came and left, so to my knowledge the Russian government has opted to leave that festival alone, which means the government understands it is being watched, and it is being much more careful in the actions that it takes,” said Osborne.

Ultimate success, he added, will be the repeal of Russia’s homosexual law.