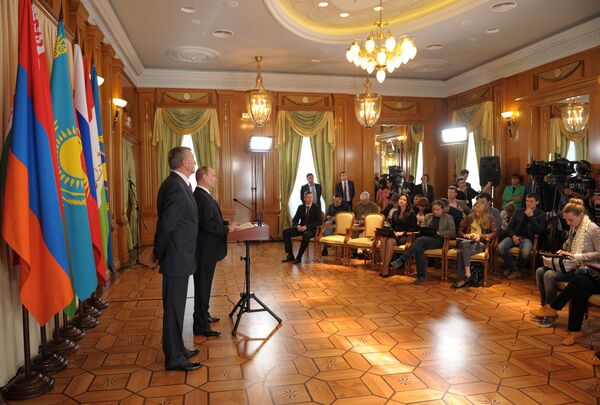 “We will take into account all possible development scenarios, take preventive measures, and provide additional collective assistance to Tajikistan to reinforce its national border with Afghanistan,” Putin told journalists Monday after a CSTO Council meeting.

“We agreed to draft a targeted interstate program for equipping this section of the border,” he said, in line with a translation of his speech posted on the Kremlin website.

The CSTO Council, the organization’s supreme ruling body comprising leaders of the six member states, gathered in the Russian Black Sea resort city of Sochi. Kyrgyzstan handed over the CSTO presidency to Russia for next year.

“We discussed the situation in Afghanistan in light of the international coalition’s troop withdrawal planned for 2014. Unfortunately, there is reason to expect a considerable rise in Afghan drug trafficking activity and in terrorist groups’ activeness,” Putin said, according to the translation.

He added that “extremists are already attempting to spread their activity into neighboring countries, including the Central Asian countries that are CSTO members.”

Putin earlier on Monday named Russia’s priorities during its presidency in the CSTO.

“We think it important to reinforce the external borders in the CSTO’s region of responsibility. We need to improve our practical action mechanisms for minimizing risks for each of the CSTO member countries,” he told the meeting’s participants.

He mentioned at an earlier meeting on Monday with presidents of CSTO member states - Armenia, Belarus, Kazakhstan, Kyrgyzstan and Tajikistan - that the unpredictable development of the situation in Afghanistan after the planned 2014 withdrawal of foreign military forces from that country could pose a major threat to its neighbors.

Putin emphasized further development of military cooperation and strengthening of the CSTO’s rapid-reaction force in light of future peacekeeping missions and the fight against drug-trafficking in the region.

The priority tasks will also include improved cooperation with the Shanghai Cooperation Organization (SCO) - another regional player comprising former Soviet republics and China - as well as better coordination of security efforts in Central Asia and worldwide under the aegis of the United Nations, he said.