Venezuela Accuses US of Closing Airspace for Presidential Plane 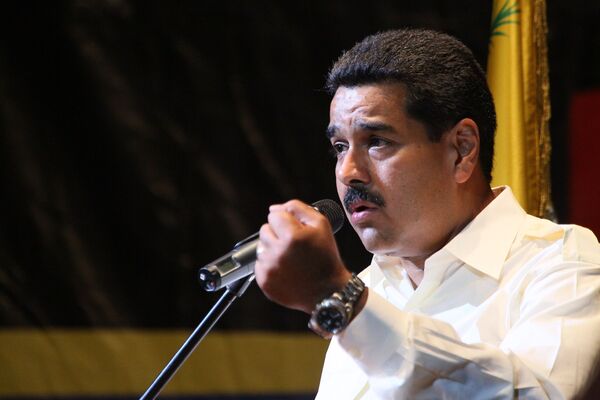 © RIA Novosti . Ruslan Krivobok
/
Go to the photo bank
Subscribe
Venezuela’s top diplomat has accused the United States of closing its airspace to the plane of Venezuelan President Nicolas Maduro, complicating his plans to fly to China on Friday.

BUENOS AIRES, September 20 (RIA Novosti) – Venezuela’s top diplomat has accused the United States of closing its airspace to the plane of Venezuelan President Nicolas Maduro, complicating his plans to fly to China on Friday.

No comment confirming, denying or explaining the allegation was immediately available from US authorities.

“Ahead of our flight to China, we were informed by the US authorities that our request to fly over US airspace in the Atlantic was rejected,” Venezuelan Foreign Minister Elias Jaua said Thursday, according to Venezuelan media. “We condemn it as yet another act of aggression by the North American empire.”

Maduro, however, said early Friday on his Twitter feed that he had left for China, on a visit scheduled to end Tuesday. Jaua had earlier said that a new route had been chosen, but gave no details.

“The US won’t succeed in disrupting my visit to China,” Maduro had reportedly said Thursday, calling the US decision a “serious mistake.”

After news of the flight problems surfaced, Venezuela’s AVN news agency quoted Maduro as saying that the United States had also been unwilling to issue a visa for Wilmer Barrientos, who heads the presidential administration. Barrientos was to attend a UN General Assembly session in New York set to begin on September 24.

“If I will have to take diplomatic measures against the US government, I will,” Maduro was quoted as saying.

Updated with Maduro's comment on Twitter and a mention of the US reaction, plus minor edits throughout.