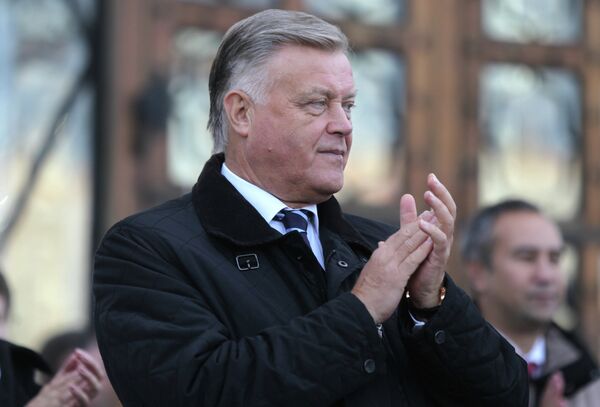 The head of state-run monopoly Russian Railways Vladimir Yakunin has dismissed long-lingering speculation linking his professional appointment to his participation in a dacha cooperative reportedly founded together with future president Vladimir Putin back in the 1990s.

MOSCOW, September 20 (RIA Novosti) – The head of state-run monopoly Russian Railways Vladimir Yakunin has dismissed long-lingering speculation linking his professional appointment to his participation in a dacha cooperative reportedly founded together with future president Vladimir Putin back in the 1990s.

In an interview with Prime news agency published Friday, Yakunin said that the Ozero (Lake) dacha cooperative in the Leningrad Region was formed by people “united by common interests” and “devoted to their country,” which inspired them in their enterprise.

“We belonged to that generation,” Yakunin said, according to Prime.

Numerous media reports and opposition figures have claimed that Ozero stakeholders included Putin and several others, who later assumed influential state and business offices. But those claims have never received official confirmation.

Yakunin didn’t say whether Putin had played any role in the dacha enterprise, but cautiously admitted that personal connections had played a role in the careers of influential officials.

“That [Ozero] was not the reason for certain people’s appointments, but the fact that we were all from Leningrad, that we knew each other, that everyone had experience behind them… I also choose my deputies on their experience, knowledge, my personal impression of a person. It’s natural,” Yakunin said.

Between 1985 and 1991 Yakunin served as a member of the diplomatic service at the Soviet Union’s permanent mission to the United Nations, but later left the state job to become a businessman as the country’s political regime and economy crumbled.

“I returned from abroad. I wanted to support my family. Remember 1991; everything was collapsing. I had a very specific question: How to survive and how to feed my family, quite literally,” he said.

Yakunin, who has headed Russian Railways for about eight years, said in the interview that he is ready for any other job, should Putin decide to replace him at the rail monopoly. His current contract there expires next year.

Rumors circulated this summer about Yakunin’s possible resignation after Russian news agencies reported that he had been dismissed from his post. The press release that had prompted the reports was soon discovered to have been a hoax.