Russian authorities said Friday that a seized Greenpeace icebreaker was being towed from the Arctic Pechora Sea to the port of Murmansk, where it will be investigated for “piracy” over its alleged attack on a Gazprom oil rig.

MOSCOW, September 20 (Alexey Eremenko, RIA Novosti) – Russian authorities said Friday that a seized Greenpeace icebreaker was being towed from the Arctic Pechora Sea to the port of Murmansk, where it will be investigated for “piracy” over its alleged attack on a Gazprom oil rig.

The Arctic Sunrise icebreaker “is being towed because the captain refused to steer it,” a spokeswoman for the Murmansk Region branch of the border guard service told RIA Novosti. The ship is expected to arrive in Murmansk by Monday or Tuesday, she said.

The trip to Murmansk is required because border guard ships in the Pechora Sea have no investigators qualified to give a legal assessment of Greenpeace’s actions, the spokeswoman said.

Two activists who had traveled to the Gazprom oil rig aboard the Arctic Sunrise were detained by border guards on Wednesday for trying to climb up the facility. A day later, border guards stormed the ship and took control of it, Greenpeace said, adding that the seizure was done at gunpoint.

The border guards believe that the attempt to scale the oil rig “bore signs of piracy,” Russia’s Investigative Committee said Friday, adding that it would be handling the check into the allegations.

Piracy is punishable with up to 15 years in prison, according to Russian legislation. 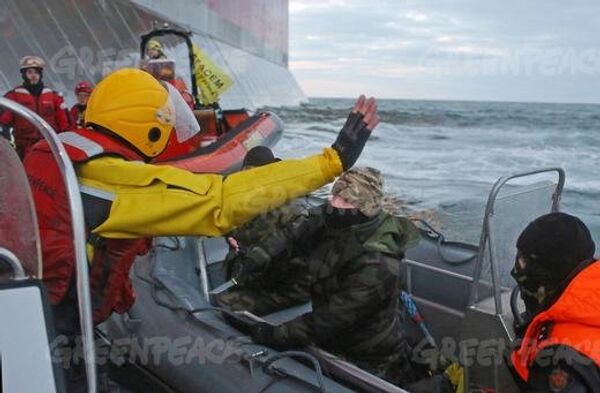 The charges could give legal weight to the ship’s seizure: The UN Convention on the Law of the Sea allows one country to seize a ship flying another country’s flag if that ship is believed to be involved in piracy. Gazprom’s oil rig falls under the convention because it is technically a ship.

Greenpeace had not commented on piracy allegations as of this article’s publication. The group earlier alleged that it was the authorities’ takeover of the Arctic Sunrise that was piracy, as it occurred in international waters.

A representative of the environmental group said Thursday that the crew had been accused of terrorism, violating the three-mile off-limits zone around the oil rig and conducting “unlawful scientific activity,” but those claims were never officially confirmed.

Law enforcement agencies of various countries, including Russia, have exercised force in international waters before, especially within a country’s 200-mile exclusive economic zone, like in the case of Arctic Sunrise, Mikhail Voitenko, editor-in-chief of the Maritime Bulletin maritime news website, told RIA Novosti on Friday.

He cited as examples the Chinese freighter New Star, sunk by Russian border guards in 2009, or last Monday’s seizure of the refrigerated cargo ship Stina, managed by a Swedish company, which was reportedly detained by the French Navy in the Caribbean on allegations of transporting cocaine.

Russia’s Foreign Ministry on Thursday harshly criticized the activists’ actions as having “the appearance of extremist activity.” The ministry noted that the ship had been sailing under a Dutch flag, and that a letter of concern had been handed to the Dutch ambassador in Russia.

Greenpeace Russia said on Twitter that its lawyers were preparing legal action in response to the seizure. The group compared the ship’s takeover to the 1985 sinking of Greenpeace’s Rainbow Warrior ship by French secret services. 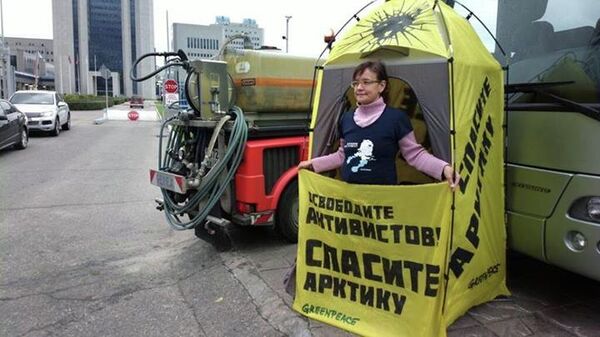 A Greenpeace picket outside the Moscow office of Gazprom
© Photo : Greenpeace Russia

Last year, six activists lead by Greenpeace head Kumi Naidoo crippled the operations of the same Gazprom rig for 15 hours by scaling it and remaining suspended in hard-to-reach areas. The activists eventually left without facing any charges.

Greenpeace on Friday also reported staging pickets outside Russian embassies in 30 countries, including Australia, Britain, Finland, Japan, New Zealand and Sweden, as well as the Moscow office of Gazprom, which has not commented on the situation.

The Arctic Sunrise reached waters off the northern coast of Russia last month and soon ran into trouble with Russian authorities when it was formally banned from sailing in the Northern Sea Route. The ship ignored the ban, which Greenpeace called unlawful.

Greenpeace and other environmental groups oppose drilling for oil in the Arctic because they say that it is currently impossible to sufficiently clean up potential oil spills in the region, and that such drilling cannot be economically viable without state subsidies.

Updated to include piracy allegations against Greenpeace.