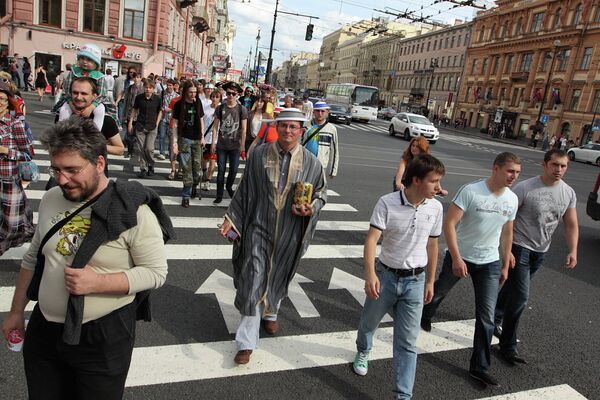 © RIA Novosti . Inna Shpigel
Subscribe
Two members of the Russian Church of the Flying Spaghetti Monster fined a combined $400 over a “pasta procession” dispersed by Moscow police in August.

MOSCOW, September 20 (Alexey Eremenko, RIA Novosti) – Two members of the Russian Church of the Flying Spaghetti Monster fined a combined $400 over a “pasta procession” dispersed by Moscow police in August.

The case was reviewed by Moscow Judge Yelena Stashina, one of 18 Russian officials that the US White House confirmed in April to be blacklisted in the United States over their alleged role in the fate of whistleblowing lawyer Sergei Magnitsky, who was detained on questioned charges and died in custody in 2009.

“She was alright, considering her reputation, to let us off with a fine below the legal minimum,” Artyom Gadelshin, who was busted with a colander on his head at the unsanctioned rally, said Friday, adding that his case was reviewed by Stashina earlier this week.

Eight followers of the tongue-in-cheek religion were charged over the rally. Public gatherings in Moscow require city government approval. Gadelshin and another activist were fined 7,000 rubles and 5,000 rubles ($220 and $160), respectively, while the six other cases are still pending review by other judges.

The penalty for individuals found guilty of unsanctioned rallies is 10,000 to 20,000 rubles ($300 to $600), but those fines can be slashed below the minimum at the judge’s discretion.

The Pastafarians in August were refused a rally permit by the Moscow City Hall, which said there were no laws regulating “pasta processions.” The activists claim they simply tried to hold a party in an outdoor cafe after the refusal, but were dispersed by police who were alerted by hardline Christian activists.

“We won’t be appealing. Legal proceedings are simply no fun, and that’s goes against everything we believe in,” said Amir Husainov, a vicar of the Church of the Flying Spaghetti Monster.

But believers are persevering and held a rally on Friday to celebrate the International Talk Like a Pirate Day, which took place Thursday. The event took place in Moscow’s recently established Hyde Park, the only place in the city where no permit is required for small gatherings.

The Russian branch of the Pastafarian movement began gathering a following in Russia last summer. The group, which frequently makes fun of the powerful Russian Orthodox Church, came under fire by Christian conservatives, including controversial St. Petersburg legislator Vitaly Milonov. However, Orthodox Church spokesman Vsevolod Chaplin said after the August rally that “a joke must be met with a joke.”