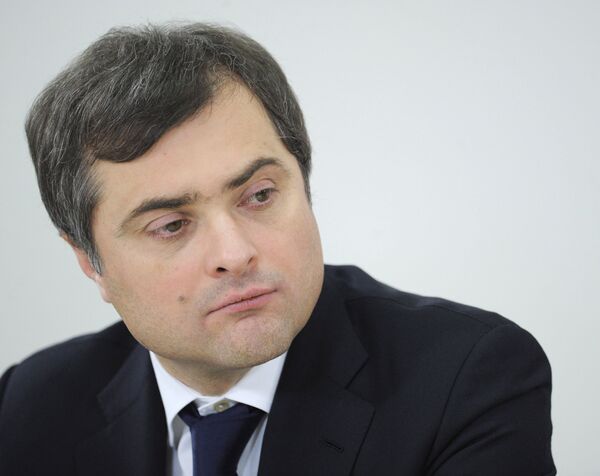 © RIA Novosti . Jana Lapikova
/
Go to the photo bank
Subscribe
Former Kremlin ideologue Vladislav Surkov, who resigned from the Russian government in May, has been appointed a presidential aide, the Kremlin press service said in a statement Friday.

MOSCOW, September 20 (RIA Novosti) – Former Kremlin ideologue Vladislav Surkov, who resigned from the Russian government in May, has been appointed a presidential aide, the Kremlin press service said in a statement Friday.

The statement did not specify which areas Surkov is going to oversee, but presidential spokesman Dmitry Peskov later confirmed that he would be responsible for social and economic issues in the breakaway Georgian provinces of Abkhazia and South Ossetia, taking over the post previously occupied by Tatyana Golikova.

“He [Surkov] will deal with exactly the same issues as Golikova did,” Peskov said.

Golikova was elected by the lower house of the Russian parliament on Friday to head Russia’s Audit Chamber.

Considered one of the architects of the “power vertical” political system ushered in under President Vladimir Putin, Surkov resigned as deputy prime minister in May shortly after sharply criticizing Russia’s powerful Investigative Committee over probes into alleged corruption at the Skolkovo innovations hub.

Surkov, who turns 49 on Saturday, said in a July interview with Russky Pioner (Russian Pioneer) magazine that it was his own decision to resign, and that it stemmed from an "emotion that had been lingering for two years.”

He also said then that he had not changed his opinion of the Russian president, and reiterated his earlier comment that Putin was sent by God “to rescue Russia from a hostile takeover.”

Before joining the government, Surkov had served some 11 years in the presidential administration, giving rise to him becoming known as Russia's "gray cardinal."