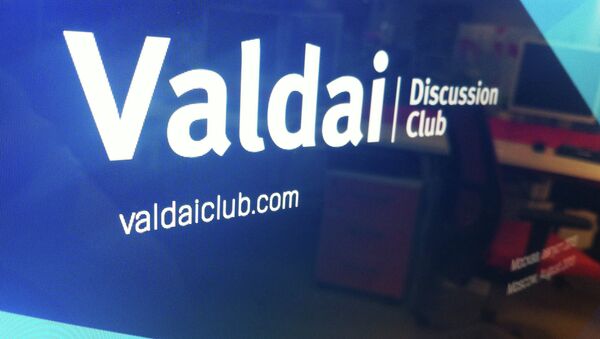 “Today, Ukraine is an independent state and we respect it. And, of course, the choice of priorities, the choice of allies is a national sovereign right of the Ukrainian people and the Ukrainian leadership,” Putin said at a meeting of the annual Valdai Discussion Club, commenting on Ukraine’s plans to sign an association agreement with the European Union.

On Wednesday Ukraine’s government approved the draft European Union Association Agreement, moving the country one step closer to its final signing, which is slated for November.

Moscow has been increasing pressure on Kiev to join the Customs Union, which would – in effect – keep Ukraine under Russia’s sphere of influence. Although Ukraine has observer status in this bloc, it has made it clear it does not plan to take on full membership.

During Thursday’s meeting of the Valdai Club, which gathered high-level Russian officials and foreign political scientists, Putin reiterated that Russia is worried that European goods could enter Ukraine – free of import duties – and then be re-exported to Customs Union countries, flooding the market and undercutting domestic producers.

“That’s why we warn in advance, we say: listen, we understand everything, [if] this is your choice, [then] do it, but keep in mind that we would have to somehow protect our market, to introduce protective mechanisms. We say this to you in advance, clearly and frankly,” he said.

The Russian president added that Russia was also seeking to sign a new basic agreement with the EU and if the two states joined forces and entered the talks with a common stance, they would be able to negotiate more favorable terms of the deal.

“We believe that if Ukraine joined the Customs Union and we coordinated our joint efforts and negotiated with the Europeans, we would had more chance to negotiate better terms of trade with our main economic and trade partner,” Putin said, adding that trade with the EU states accounts for nearly a half of all Russian trade turnover.

He said that according to estimates made by Russian experts and confirmed by Ukraine’s Academy of Sciences, Ukraine would receive additional budget incomes of nearly $9 billion if it joins the Customs Union.

“[But] how would [Ukraine] benefit from the association with EU? Open markets? Well, this does make economy more liberal. But I have no idea about whether Ukrainian economy will be able to cope with such liberalism. But this is not our business, our Ukrainian partners should decide it for themselves,” Putin said.