Russia’s Putin Says He May Seek 4th Term as President 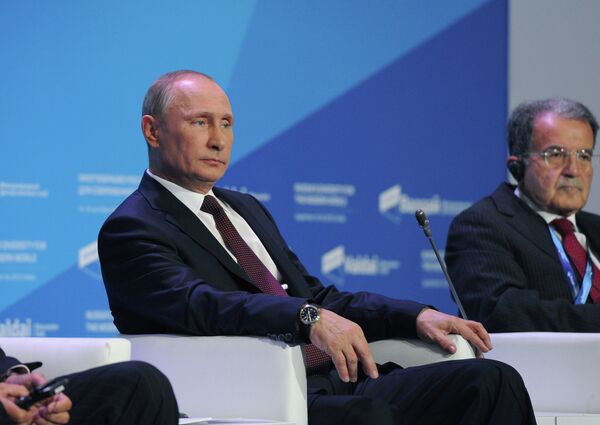 © RIA Novosti . Mikhail Klimentjew
/
Go to the photo bank
Subscribe
In a playful exchange with France’s former prime minister, Russian President Vladimir Putin said Thursday that it was possible he would seek a fourth presidential term.

The exchange took place at the 10th annual meeting of the Valdai Club, a four-day, Kremlin-backed discussion forum bringing together several hundred Russian and foreign officials, scholars and other public figures in northwestern Russia.

During a question-and-answer session following Putin’s speech on Russia’s national identity, he asked former French Prime Minister Francois Fillon whether the latter planned to run for his country’s presidency; Fillon said he would reply only if Putin answered the same question – to which Putin said, “I don’t exclude [the possibility].”

“And I, too, don’t exclude [the possibility],” quipped Fillon, according to the Russian translation.

Putin was Russia's president from New Year's Eve of 1999 until spring 2008, and then served one four-year term as prime minister. He returned to the Kremlin for a third term last year.