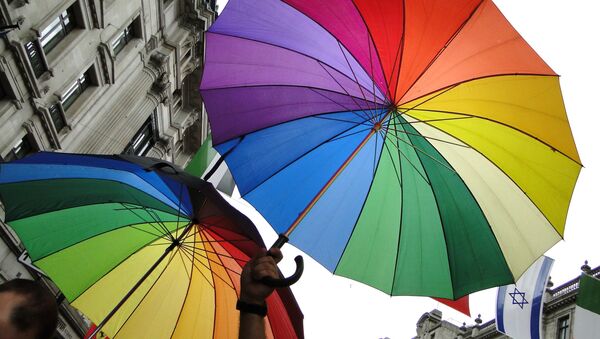 © Sputnik / Alisa Volgina
Subscribe
The EU should tend to its own problems regarding gay rights before criticizing other countries, Russia’s human rights envoy said Thursday, after reviewing an NGO report on homophobic violence in Europe.

MOSCOW, September 19 (RIA Novosti) – The EU should tend to its own problems regarding gay rights before criticizing other countries, Russia’s human rights envoy said Thursday, after reviewing an NGO report on homophobic violence in Europe.

Answering a question on the report, Konstantin Dolgov – the Russian Foreign Ministry’s human rights commissioner – noted that the report included a statistic that 80 percent of Europeans affected by homophobic violence don’t report the crime to the police for fear of institutionalized discrimination.

The account represented “confirmation that before criticizing other countries for alleged infringement on the rights of sexual minorities, the European Union and its member states should deal with the serious existing problems in this area at home,” Dolgov said, according to a statement on the Foreign Ministry’s website.

Amnesty International’s study, “Because of Who I Am: Homophobia, Transphobia and Hate Crimes in Europe,” detailed gaps in EU legislation for fighting sexuality- and gender-motivated hate crimes, barriers to reporting this type of attack, and recommendations to member states to alleviate the problem.

Dolgov has ardently opposed “cultural interference” from the West on the issue of gay rights after major international backlash over Russia’s adoption in June of a law forbidding the promotion of “non-traditional sexual relationships” to minors.

At a Beijing forum on human rights last week, Dolgov said that Russia “cannot but be concerned about the aspiration of the Western countries to impose their neo-liberal values as a universal basis for life-sustaining activity on other members of the international community.”

The vast majority of Russians appear to back the so-called gay propaganda law, with consistently over three-quarters of people polled over the spring and summer expressing a negative attitude to the issue of LGBT rights. In a June survey by the state-run VTsIOM pollster, 88 percent of those polled expressed support for a ban on the “propaganda of homosexuality among minors.”