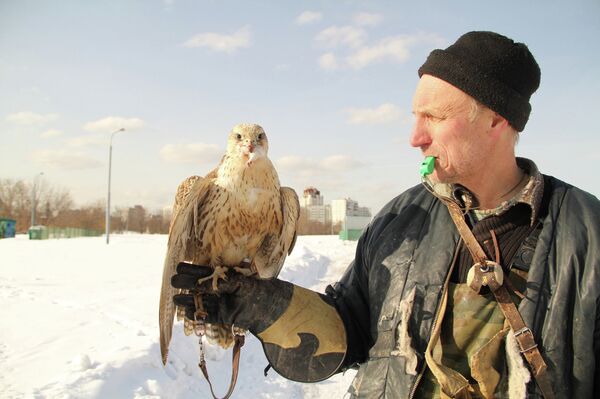 © RIA Novosti . Dmitri Vinogradov
Subscribe
A winged predator tasked with guarding a Russian airport from stray birds has left the country for Finland in a move described by Russian media as “emigration.”

MOSCOW, September 20 (RIA Novosti) – A winged predator tasked with guarding a Russian airport from stray birds has left the country for Finland in a move described by Russian media as “emigration.”

The trained falcon vanished from the premises of St. Petersburg’s Pulkovo Airport in July, the Komsomolskaya Pravda newspaper said Wednesday. The bird popped up a month later in the Finnish city of Kuopio, 440 kilometers north of St. Petersburg, incapable of flying because of a damaged tail, the report said.

A local family housed the falcon for about a month but eventually handed it over to local veterinarians, who conducted a small investigation and eventually identified the bird as one of a dozen winged guards at Pulkovo, the Gazeta.spb.ru news site said, adding that the falcon was a cross between a saker and a peregrine.

The bird, however, will likely not return to its airport duties of chasing geese and pigeons. As a protected species, it is free to travel across state borders on its own volition, and a great deal of paperwork would be required to officially transfer it for service purposes, Russiantourism.ru said.

It remained unclear what prompted it to leave the airport, being only the second such desertion in the decades-long history of Pulkovo’s falcon guard service, Komsomolskaya Pravda reported.