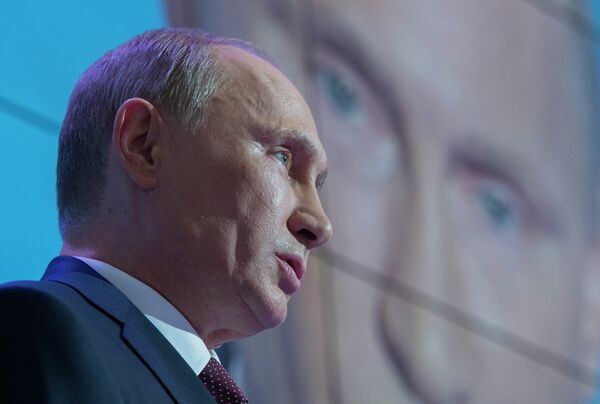 © RIA Novosti . Sergey Guneev
/
Go to the photo bank
Subscribe
Russian President Vladimir Putin hailed Eurasian integration on Thursday, including a planned Moscow-led political and economic bloc, as a way for former Soviet republics to capitalize on their position linking Europe and Asia.

“Eurasian integration is a chance for the post-Soviet space to become an independent center of global development, rather than the outskirts of Europe and Asia,” Putin said at a meeting of the annual Valdai Club, a discussion forum where Russian and foreign officials, political scientists and other public figures have been meeting since 2004.

Putin has long been promoting the idea of Eurasian integration, with many analysts seeing this as a key step in re-establishing Russia’s influence among former Soviet republics while facing competition from two economic powerhouses – the European Union in the West and China in the East.

During his speech and question-answer session, which lasted over three hours, Putin described the planned Eurasian Economic Union as “a project aimed at keeping the identity of peoples populating the historical Eurasian space in the new century and the new world.”

The union is seen as the next step following the creation of a Moscow-led Customs Union involving Belarus, Kazakhstan and Russia, which has been operational since January 1, 2012, and allows free movement of capital and goods across the three states’ national borders. Kazakhstan's Central Asian neighbor Kyrgyzstan has applied to join.

Russia has called on Ukraine and Moldova to join the trade bloc, although Kiev has long harbored ambitions of moving closer to the EU, and Moscow has recently had trade-related friction with both former Soviet republics.