Tajik Parliament to Ratify Extension of Russian Base Lease 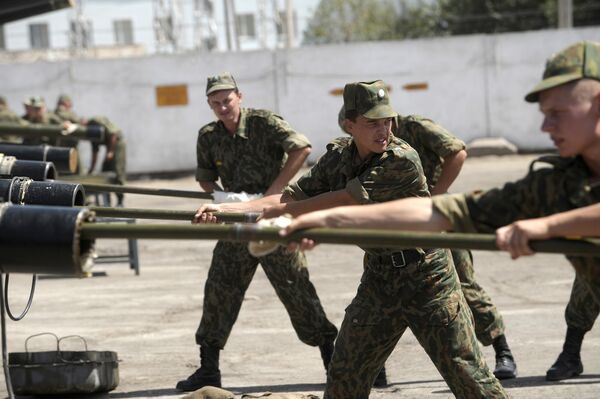 © RIA Novosti . Sergey Guneev
/
Go to the photo bank
Subscribe
Tajikistan’s parliament is expected to promptly ratify a deal that extends Russia’s lease of a military base in the Central Asian nation that borders Afghanistan, a parliamentary representative said Wednesday.

DUSHANBE, September 18 (RIA Novosti) – Tajikistan’s parliament is expected to promptly ratify a deal that extends Russia’s lease of a military base in the Central Asian nation that borders Afghanistan, a parliamentary representative said Wednesday.

The agreement prolonging the lease through 2042 “will be considered in the nearest future,” and given the deal’s significance to Tajikistan, there will be no problem with its ratification, said Amirkul Azimov, head of the lower chamber of parliament’s defense, security and law and order committee.

The accord was signed by Tajik President Emomali Rakhmon and his Russian counterpart Vladimir Putin in October 2012. It envisages that the base will be used to protect Russia’s interests and – with the help of joint forces – Tajikistan’s security. Under the terms of the agreement, Russia will supply the joint forces with weapons and equipment.

Last month, Putin instructed the Russian military to help Tajikistan face potential threats after international troops withdraw from Afghanistan next year. Russia’s Defense Minister Sergei Shoigu said then that a program to modernize the Tajik army could cost up to $200 million and would involve repairing existing equipment as well as purchasing new weaponry.

About 7,000 troops – Russia’s largest ground force contingent deployed abroad – are stationed at three military facilities collectively known as the 201st military base. The facilities are located in the capital, Dushanbe, the southwestern city of Qurgonteppa some 100 kilometers from Dushanbe, and Kulob, about 200 kilometers southeast of the capital.

The NATO-led International Security Assistance Force (ISAF), which has been fighting the radical Islamist Taliban movement in Afghanistan since 2001, is expected to withdraw from the war-torn country in 2014.

Russia’s military intelligence agency, the GRU, said in May that it expected the influence of the Taliban to grow in Afghanistan after international coalition forces are pulled out, and described the situation as a “serious challenge to international stability.”

According to the Military Balance Report by the International Institute for Strategic Studies, Tajik armed forces personnel totaled 16,300 as of 2011, and include land-based and mobile units, an air force and an anti-aircraft force that mostly use outdated Soviet-era military equipment.