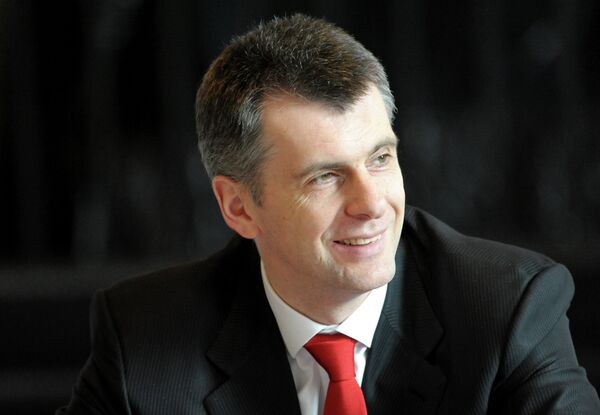 © RIA Novosti . Sergei Piatakov
/
Go to the mediabank
Subscribe
International
India
Africa
Mikhail Prokhorov, the sports-mad Russian tycoon who owns the Brooklyn Nets basketball team and is also the president of the Russian Biathlon Union, is setting his country a target of two or three biathlon gold medals at next year's Sochi Olympics.

SOCHI, September 18 (R-Sport) – Mikhail Prokhorov, the sports-mad Russian tycoon who owns the Brooklyn Nets basketball team and is also the president of the Russian Biathlon Union, is setting his country a target of two or three biathlon gold medals at next year's Sochi Olympics.

"We're hoping that our biathletes should win two or three gold medals," Prokhorov said Wednesday at a meeting of the Biathlon Union in next year's host city. "That minimal result would suit us," he added.

Russia used to be a biathlon powerhouse, but results in the last few years have seen the country's position slip considerably: Two of Russia's miserly haul of three golds at the 2010 Vancouver Games came in the biathlon, but the country collected a grand total of four medals from the last two world championships, finishing a disappointing seventh and joint-fifth in the respective medal tables.

The decline has come despite lavish funding from Prokhorov, who has run the Biathlon Union since 2008. He has said he will step down in the event of failure in Sochi.

The results have prompted changes to coaching staff to prevent a similar flop come February at the Winter Olympics, which would be all the more humiliating because they are on home snow.

The women’s team has been boosted by the addition of famed Soviet coaches Vladimir Korolkevich and Alexander Selifonov, who replaced Wolfgang Pichler after the German was demoted in the wake of the world championships failure.

Prokhorov, meanwhile, has complained about the track to be used for the Games, saying the Laura biathlon and cross-country complex in the mountains above Sochi meets global standards but was not designed with the wishes of the Russian athletes in mind, meaning the country has all but relinquished its home advantage.

But on Wednesday he insisted it should still give Russia an edge.

"The Olympics are at home, our supporters and the home environment should help us," he said.

Norway, Germany and France are currently the leading biathlon nations, with Emil Hegle Svendsen of Norway and France's Martin Fourcade the favorites to capture gold medals for the men; and Norwegian star Tora Berger the biathlete to beat in the women's events.