Putin Urges Russian Weaponry Makers to Keep Up With Demands 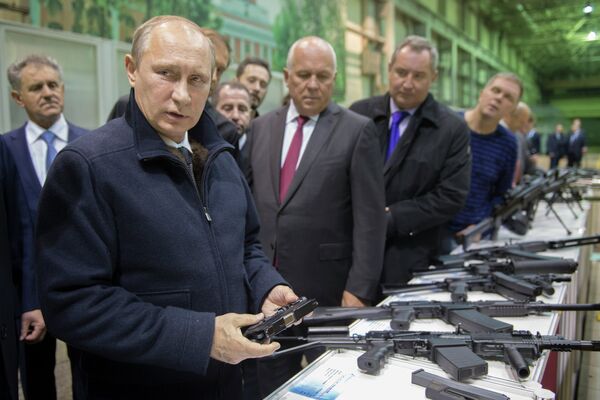 Russian President Vladimir Putin urged his country’s arms manufacturers on Wednesday to produce weapons that are superior to those of possible adversaries.

IZHEVSK, September 18 (RIA Novosti) – Russian President Vladimir Putin urged his country’s arms manufacturers on Wednesday to produce weapons that are superior to those of possible adversaries.

“Our past successes are no reason to sit back and relax,” he said during a visit to the Kalashnikov gun maker. “We must constantly strive to stay on top of current demands.”

He added that many of Russia’s legendary weapons were “no longer able to make the grade.”

He urged the Defense Ministry and weapons makers to redouble their efforts to develop new models of arms and military equipment, especially precision weaponry and fire-control systems.

Lt. Gen. Alexander Shevchenko said earlier in September that many defense firms were still not ready for mass production of high-tech weapons systems and many military technologies were still at 1980s levels.

There has been a disturbing decline in the quality of weapon production, he said, adding that this was mainly due to obsolete equipment and an extremely low pace of modernization.

The Russian government has reportedly allocated 20 trillion rubles ($640 billion) for the comprehensive rearmament of the country’s Armed Forces. The measure is expected to make the share of modern weaponry rise to 30 percent by 2015, and exceed 70 percent by 2020.

Russian Deputy Prime Minister Dmitry Rogozin said last Tuesday that Russia would spend $650 billion for the rearmament and modernization of its armed forces through 2020.