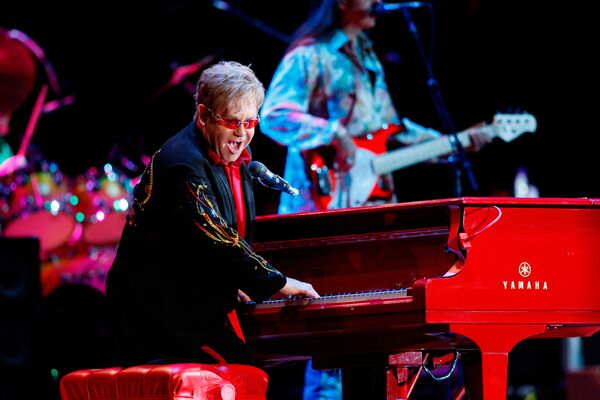 Openly gay British pop star Elton John believes that staging a concert in Moscow in December, rather than boycotting the venue, would better serve the interests of the Russian gay community.

MOSCOW, September 17 (RIA Novosti) - Openly gay British pop star Elton John believes that staging a concert in Moscow in December, rather than boycotting the venue, would better serve the interests of the Russian gay community.

“There's two avenues of thought: do you stop everyone going, ban all the artists coming in from Russia? But then you're really leaving the men and women who are gay and suffering under the anti-gay laws in an isolated situation,” Elton John said in an interview with The Guardian published on Monday.

“As a gay man, I can't leave those people on their own without going over there and supporting them. I don't know what's going to happen, but I've got to go,” the famous singer said.

Elton John, 66, married his longtime partner David Furnish in 2005 in one of Britain's first same-sex ceremonies and continues to be outspoken advocate for LGBT social movements worldwide. The couple has two sons born by the same surrogate mother.

Russia adopted a controversial and vaguely-worded law in June banning the promotion of "non-traditional sexual relationships" to minors, an offense punishable with hefty fines. While the law’s proponents argue it is aimed at protecting children, critics claim the legislation is part of a much wider crackdown on Russia’s lesbian, gay, bisexual and transgender (LGBT) community.

US pop divas Madonna and Lady Gaga, who championed gay rights during their shows in Russia last year, were subsequently threatened with legal action by conservative Russian lawmakers.