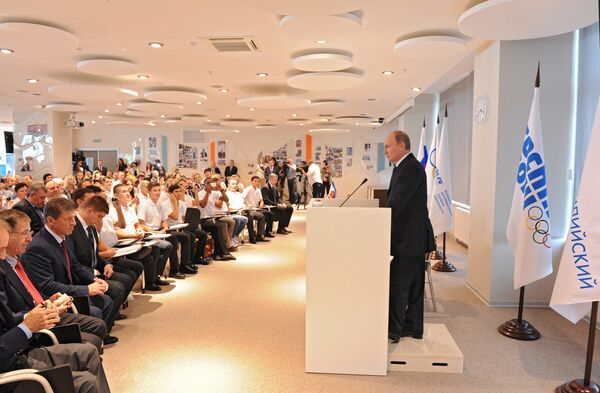 © RIA Novosti . Mikhail Klimentyev
/
Go to the photo bank
Subscribe
Russian President Vladimir Putin admitted on Monday that there were still some "ongoing glitches" in preparations for next year's Winter Olympics in Sochi, but he insisted that overall the job is on track.

SOCHI, September 16 (R-Sport) – Russian President Vladimir Putin admitted on Monday that there were still some "ongoing glitches" in preparations for next year's Winter Olympics in Sochi, but he insisted that overall the job is on track.

Putin spoke while visiting Sochi on Monday at the opening of a new $500 million Olympic university dedicated to helping ex-athletes build new careers as sports administrators.

"Despite the large amount of work that has already been done, there are still ongoing glitches and delays in time frames," Putin said. "But overall it's a normal thing for such a large project. There's nothing out of the ordinary."

"We know the time the Olympics start, and we can't slip at all," he added.

With 144 days to go until the opening ceremony, Putin ordered the government's Olympic supervisor Dmitry Kozak to send him fortnightly reports and said he would drop into the host city on a regular basis to keep tabs on the work.

"I'm going to be coming here more often," he said.

There have been relatively few delays in Sochi compared to other recent Olympics. The most notable happened at the RusSki Gorki ski jump complex, whose former project chief was given a public dressing-down by Putin with a year to go until the Games.

Fraud charges related to non-Olympic employment have since been opened against the official concerned, Akhmed Bilalov, who has since fled the country and alleges attempts have been made to poison him.

The Sochi Olympics are the first Winter Games to be held in Russia and will run from February 7 to 23.