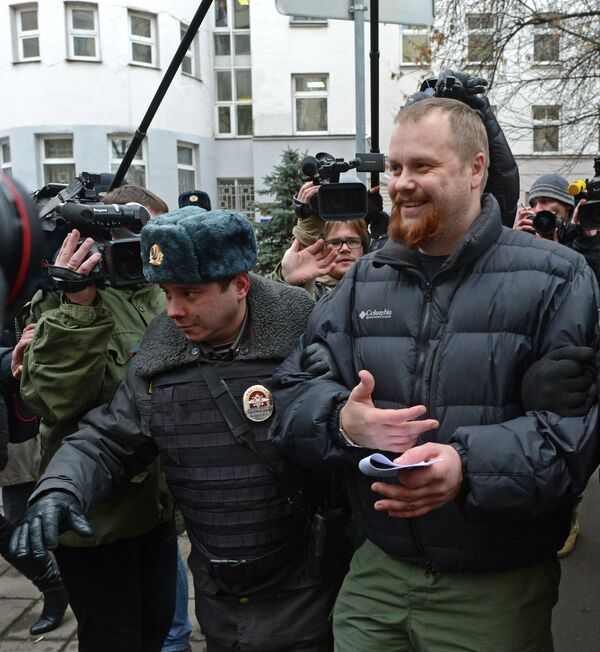 Moscow police said 25 people were detained Saturday at an anti-migrant nationalist rally in central Moscow, the latest manifestation of xenophobia in the nation that has become a magnet for millions of labor migrants.

MOSCOW, September 14 (RIA Novosti) – Moscow police said 25 people were detained Saturday at an anti-migrant nationalist rally in central Moscow, the latest manifestation of xenophobia in the nation that has become a magnet for millions of labor migrants.

The rally on Moscow’s Pushkin Square was organized by Dmitri Demushkin, a former Russian skinhead and neo-Nazi whose Slavic Union group is banned in Russia for “extremism.”

Demushkin said several hundred protesters rallied against a string of proposed laws that will simplify the procedure of obtaining Russian citizenship for Russia-born children of foreigners and people from former Soviet republics whose parents were born in Russia.

“The law involves 100 million people and we, as Russian nationalists, are naturally against it,” he told RIA Novosti.

Russia is home to 143 million people, while the USSR’s population approached 300 million before the 1991 Soviet collapse.

Demushkin claimed that some 200 people took part in the protest and claimed that riot police dispersed the rally and rounded up “four busloads of people.”

A source in Moscow police told RIA Novosti that only 25 people were detained and released several hours later after “a prophylactic conversation.”

In March, Demushkin has been charged with organizing of an “extremist group” and faces up to 3 years in jail. At a court hearing in June, he denied the charge and said that he only called on his followers to “live a healthy lifestyle.”

In his online autobiography and numerous videos posted on his website the 34-year-old boxing enthusiast shows his skills in martial arts and knife fight.

Hundreds of neo-Nazis, many of them teenagers, have been convicted and sentenced to jail in Russia in recent years for killing and assaulting foreigners and non-Slavs, including natives of Russia’s Northern Caucasus and ex-Soviet Central Asia, according to Moscow-based hate crimes monitor Sova.

Economic growth driven by revenues from oil exports and a dwindling domestic labor force have attract millions of labor migrants, many of them from Central Asia. Some 11.3 million foreigners entered Russia this year, of whom 3 million work illegally, the Federal Migration Service said in late July.