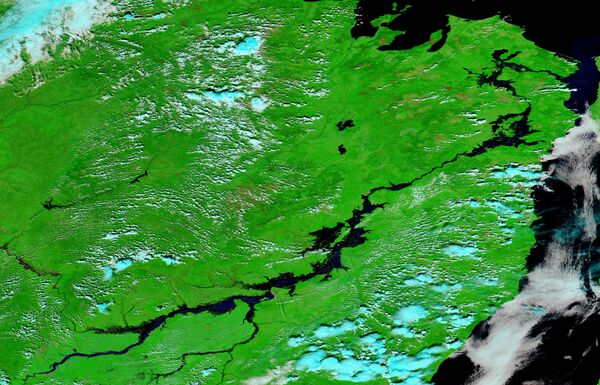 The images were captured by the Moderate Resolution Imaging Spectroradiometer (MODIS). They have been colorized because they were shot using short-wave and near-infrared light, which is invisible to human eyes. Water in the photos is black, plant-covered land is green, and the flood-hit city of Komsomolsk-on-Amur is pale brown.

The current flooding in Russia’s Far East, which according to Russian meteorologists is the worst in the region in 120 years, has affected the Amur and Magadan regions, the Jewish Autonomous Region, and the Primorye Territory, as well as in the Siberian republic of Yakutia.

Russia’s Emergency Situations Ministry said Friday that the floods had affected 97 residential areas, 76 of them in the Khabarovsk Region. About 4,000 houses, with some 50,000 inhabitants, are currently inundated in various parts of the Russian Far East.

The Khabarovsk Territory remains the worst-hit region. The rising water level near the region’s second-largest city, Komsomolsk-on-Amur, reached a peak of 911 centimeters (almost 30 feet) on Thursday afternoon and stalled before slightly decreasing, by a centimeter, by Friday morning.