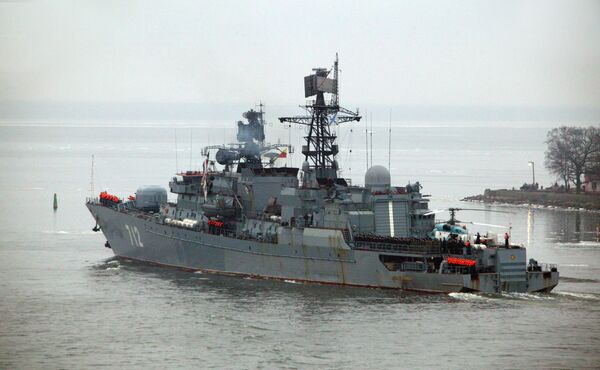 © RIA Novosti . Igor Zarembo
/
Go to the mediabank
Subscribe
International
India
Africa
The Russian Navy is bolstering its strength in the Mediterranean Sea from seven to ten warships, its top commander told journalists on Friday.

ST. PETERSBURG, September 13 (RIA Novosti) – The Russian Navy is bolstering its strength in the Mediterranean Sea from seven to ten warships, its top commander told journalists on Friday.

The guided-missile cruiser Moskva, the destroyer Smetlivy and the assault landing ship Nikolai Filchenkov are on their way to join Russia’s naval task force already stationed in the Mediterranean, the Russian Navy’s commander-in-chief Viktor Chirkov announced.

“The tasks are very clear: to avoid the slightest threat to the borders and national security. This is the practice of all navies of the world – to be located where the level of tension is increasing,” Chirkov said. “They [ships] are all acting according to the operational command plan of the offshore maritime zone.”

Russia began its military buildup in the Mediterranean in 2012. Starting in December last year, the navy established a standing task force in the eastern Mediterranean Sea in response to heightened regional tensions due to Syria’s ongoing civil war, now well into its third year.

From May 1, 2013, all Russian warships operating in the region have been grouped under a single task force under a special offshore maritime zone operational command.

The Russian Navy said in an earlier statement that the guided-missile cruiser Moskva had passed through the Straits of Gibraltar on September 10. The RT television channel reported that it is expected to join the Mediterranean fleet by September 15 or 16.