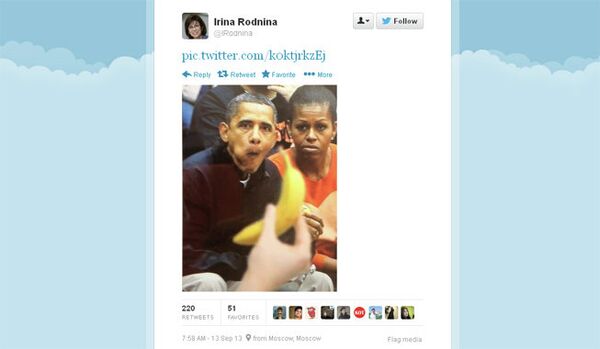 © Irina Rodnina's Twitter Page
Subscribe
An unflattering photo of US President Barack Obama with racist connotations was sent out Friday evening from a Twitter account that seems to belong to a federal Russian lawmaker and former Olympic gold medalist.

MOSCOW, September 14 (RIA Novosti) – An unflattering photo of US President Barack Obama with racist connotations was sent out Friday evening from a Twitter account that seems to belong to a federal Russian lawmaker and former Olympic gold medalist.

The photo of Obama and his wife, Michelle, seemingly posted by Irina Rodnina of the ruling United Russia party, depicts the president chewing a mouthful of food; in the foreground, an outstretched hand is holding a banana at which the Obamas seem to be staring. The image, which could have been digitally manipulated and has been making the rounds on social media for months, seems to have been shot at a sporting event.

The authenticity of the @IRodnina Twitter account could not be confirmed in time for publication, but indirect evidence, like its nearly 20,000 followers and the nature of previous posts, suggests it does genuinely belong to the Olympic star-turned-legislator.

The Obama image has sparked a debate among Russian journalists. Some reprimanded Rodnina – a figure-skating champion who won Olympic gold for the Soviet Union in 1972, 1976 and 1980 – for shaming herself.

Television and radio personality Tikhon Dzyadko tweeted in response: “Duma deputy Rodnina doesn’t hide that she is a racist.” Journalist Tonia Samsonova pointed out that the face Obama is making in the photo may be funny, but “‘black man/banana’ is not.”

Other commenters accused the critics of being too politically correct, prudish and hypocritical. The editor of the pro-Kremlin television channel RT, formerly known as Russia Today, Margarita Simonyan, also noted that opposition leader Alexei Navalny, who retweeted the controversial post to his 400,000-plus followers, has himself been accused of racism.

Rodnina has held her seat in the State Duma, the lower house of parliament, since the controversial 2011 elections, which sparked wide-scale protests in Moscow and several other large cities due to allegations of vote-rigging.