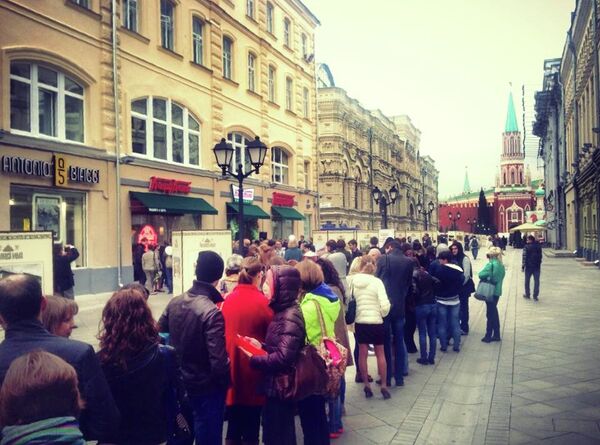 Hundreds of doughnut lovers lined up along a downtown Moscow street, steps away from Red Square, as American franchiser Krispy Kreme opened its first cafe in Russia this week in cooperation with a prominent local restaurateur.

MOSCOW, September 13 (Peter Spinella, RIA Novosti) – Hundreds of doughnut lovers lined up along a downtown Moscow street, steps away from Red Square, as American franchiser Krispy Kreme opened its first cafe in Russia this week in cooperation with a prominent local restaurateur.

Krispy Kreme expects to open 40 locations in the Russian capital under a franchising deal with famed restaurateur Arkady Novikov, whose eponymous holding already runs about 50 restaurants in the country, including some of Moscow’s highest-end dining spots.

Novikov told RIA Novosti that the initial investment in Krispy Kreme in Russia had been $10 million, with the cost of opening each cafe estimated at $500,000 to $700,000. He declined to specify the investors.

The 300-square-meter flagship cafe beside the historic GUM shopping mall hopes to attract local shoppers and tourists both with a classic doughnut assortment and with a chocolate-nut version conjured up especially for the Russian palate.

One draw is that the doughnuts are baked at the cafe, right before customers’ eyes, circling around a glistening metallic conveyer in the glassed-off “doughnut theater.”

True to Moscow’s reputation as one of the world’s most expensive cities, prices at the cafe are about twice those at the chain’s US shops, with a single doughnut in Moscow going for about $2 (60 rubles) and an assorted dozen for almost $15 (480 rubles). A large coffee costs about $6 (200 rubles), around a dollar more than the smaller option. A large hot chocolate, likely to be in demand as the winter cold sets in, is also about $6.

The cafe’s Moscow prices are comparable to those at rival Dunkin’ Donuts, which opened in the Russian capital in 1996 but left three years later due to a recession. The chain returned to Russia in 2010 and already has dozens of cafes in the capital.

Dunkin’ Donuts has a much bigger global presence, with some 9,000 cafes across more than 30 countries, according to its website. A spokesman in Moscow said the company was opening about two new cafes each month in Russia, primarily around the capital.

He noted that more than 60 percent of all chain businesses in Russia are cafes, and in Moscow there are more than 500 to compete with.

But Krispy Kreme’s Welch thinks his company has the advantage in the doughnut business: “Our doughnuts are the best in the world,” he said at the opening.