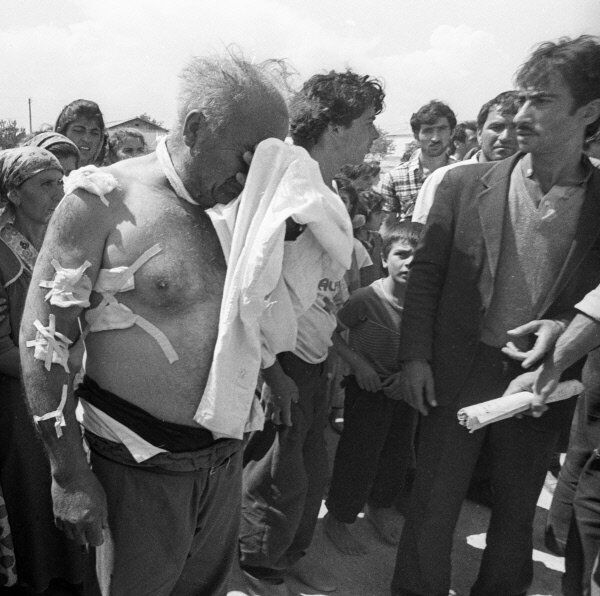 © RIA Novosti . Utarbekov
Subscribe
Rights activists in Russia and the United States say they are quietly exploring ways to help thousands of Meskhetian Turks from Russia, where they claim severe abuse and discrimination, possibly by relocating them to the United States.

WASHINGTON, September 13 (By Maria Young for RIA Novosti) – Rights activists in Russia and the United States say they are quietly exploring ways to help thousands of Meskhetian Turks from Russia, where they claim severe abuse and discrimination, possibly by relocating them to the United States.

“We met in July with officials from DC, Congress members, human rights agencies. And we are working with agencies in Russia. Their job is collecting information and background because we are trying to get evidence and documents and proof about what’s happening with these people,” said Islom Shakhbandarov, President of the Ahiska Turkish American Community of Dayton.

The idea, Shakhbandarov told RIA Novosti, is to document extensive ethnic and religious discrimination against the Meskhetian Turks, also known as Ahiska Turks, a primarily Muslim population who have settled for the last two decades in southern Russia following the 1991 collapse of the Soviet Union.

Proof of widespread, significant mistreatment can be used to form the basis for a new, expanded resettlement program through the US State Department, much like an earlier program the State Department says brought an estimated 11,000 Meskhetian Turk refugees from the Krasnodar region of southern Russia to the United States from 2004 to 2007.

Dan Langenkamp, a spokesman for the State Department’s Bureau of Population, Refugees, and Migration (PRM) confirmed an official July 12 meeting with Meskhetian Turk representatives, but did not indicate whether the US is open to the possibility of a new resettlement program.

Historically, Meskhetian Turks have lived in areas along the border between the former Soviet republic of Georgia, today an independent country, and Turkey. They were deported in mass numbers in 1944 by former Soviet Premier Joseph Stalin to Uzbekistan, another former Soviet republic, but fled from there following pogroms in 1989 and ended up settling in or near the Krasnodar region in southern Russia.

The effort now, activists say, is to gather the evidence they need to expand the program to Meskhetian Turks in areas of southern Russia beyond Krasnodar, where they say the ethnic population also faces discrimination.

But it’s not easy, they say.

“A lot of people are afraid. They tell us what happened to them, but as soon as it comes to speaking publicly or writing to testify, they say, ‘No, we are afraid.’ And the threat is very real,” said Vadim Karastelev, an activist affiliated with the Moscow Helsinki Group, one of Russia’s oldest and most prominent human rights organizations.

He described a mass attack committed on Meskhetian Turks who were celebrating a wedding in July in the Russian province of Kabardino–Balkaria about 300 miles from Krasnodar, telling RIA Novosti: “The attackers shouted ‘Get out or we’ll burn your house and kill all of you.’"

“This is not an empty threat. I have pictures of battered men, and I have their statements to the police. It’s all just terrible,” Karastelev said.

The claims of abuse and discrimination against Meskhetian Turks in southern Russia range from violent assaults and brutal attacks to intimidating threats, and a lack of access to jobs, housing, protection and education.

“There still remain a large number of people who don’t have passports, don’t have Russian citizenship, and one of the reasons is bribery. If you don’t have enough money you won’t be able to get through the process,” said Shakhbandarov.

The absence of a passport makes it nearly impossible to have marriages validated or get work permits, he said, adding, “Our community is defenseless. We don’t have our own identity, there’s still segregation at the schools, like Turkish classes and Russian classes. The Cossacks recently claimed an 11-year-old boy raped a girl, and even though there were no prosecutors, they forced the family to move.”

“As we understand it, the Russian government denies there are any ethnic issues in Russia,” he said.

The Russian Embassy in Washington did not respond to RIA Novosti’s request for comment.

The activists have turned to international human rights organizations such as Amnesty International, Human Rights Watch and Freedom House, looking for practical help in documenting cases of abuse.

“We think the maximum number of people is maybe 15,000 to 20,000 who would be eligible, but we have to gather the evidence and we don’t have enough manpower,” said Shakhbandarov. “We need help.”