Putin Uses NYT Op-Ed to Warn US Against Syria Strike 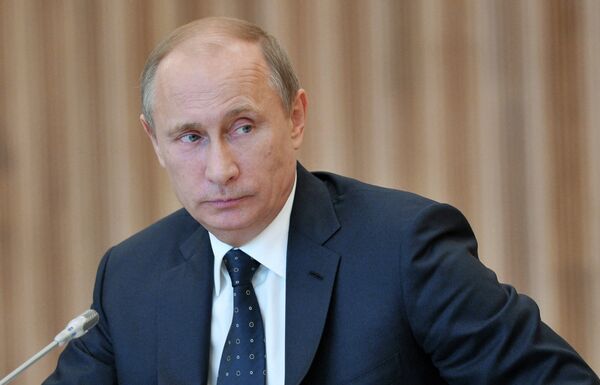 © RIA Novosti . Aleksey Nikolskii
/
Go to the photo bank
Subscribe
A potential US strike on Syria is fraught with dangerous consequences, Russian President Vladimir Putin has warned in an op-ed he wrote for the New York Times.

MOSCOW, September 12 (RIA Novosti) - A potential US strike on Syria is fraught with dangerous consequences, Russian President Vladimir Putin has warned in an op-ed he wrote for the New York Times.

Washington is currently contemplating a strike on Syria as retaliation for a deadly August 21 chemical weapons attack in a Damascus suburb, which it has attributed to the regime of Syrian President Bashar Assad. Official Damascus has blamed the attack on rebel forces, and Russia has tentatively backed its long-time ally, while calling for further investigation.

"Recent events surrounding Syria have prompted me to speak directly to the American people and their political leaders. It is important to do so at a time of insufficient communication between our societies," Putin said in the op-ed, entitled "A Plea for Caution from Russia," which was posted on the US newspaper's website Wednesday.

“The potential strike by the United States against Syria, despite strong opposition from many countries and major political and religious leaders, including the pope, will result in more innocent victims and escalation, potentially spreading the conflict far beyond Syria’s borders,” he said.

“A strike would increase violence and unleash a new wave of terrorism. It could undermine multilateral efforts to resolve the Iranian nuclear problem and the Israeli-Palestinian conflict and further destabilize the Middle East and North Africa,” Putin wrote.

“It could throw the entire system of international law and order out of balance,” he said in the article.

The unrest in Syria began in March 2011 and later escalated into a civil war. More than 100,000 people have been killed in the conflict so far, according to UN estimates.

Putin reiterated Russia’s position that the Syrian civil war should be resolved by peaceful means.

“From the outset, Russia has advocated peaceful dialogue enabling Syrians to develop a compromise plan for their own future. We are not protecting the Syrian government, but international law,” he wrote.

“We need to use the United Nations Security Council and believe that preserving law and order in today’s complex and turbulent world is one of the few ways to keep international relations from sliding into chaos,” Putin said in his op-ed in the New York Times.

He underlined that the current international law only permits use of force “in self-defense or by the decision of the Security Council,” adding that all other ways are “unacceptable under the United Nations Charter and would constitute an act of aggression.”

Noting that “no one doubts that poison gas was used in Syria,” Putin said the gas “was used not by the Syrian Army, but by opposition forces, to provoke intervention by their powerful foreign patrons, who would be siding with the fundamentalists.”

Syria’s foreign minister, Walid Muallem, said Tuesday his country was ready to give up chemical weapons and join an international convention banning them.

US Secretary of State John Kerry meets Russian Foreign Minister Sergei Lavrov in Geneva on Thursday for hastily organized talks on a Russian plan to prevent a US attack on Syria by placing the war-torn country’s chemical weapons under international control.

Speaking on the Al-Mayadeen pan-Arabic satellite television channel, Russia’s ambassador to Lebanon, Alexander Zasypkin, said Moscow had handed over to the UN Security Council evidence that chemical weapons in Syria were used by rebel forces.

The Russian president voiced concern that “military intervention in internal conflicts in foreign countries has become commonplace for the United States.”

He expressed doubt that it could be in the United States’ long-term interest and added that many people worldwide “increasingly see America not as a model of democracy but as relying solely on brute force.”

Noting that his working and personal relationship with US President Barack Obama was “marked by growing trust,” Putin said: “I welcome the president’s interest in continuing the dialogue with Russia on Syria.”

The Russian leader said he and Obama “must work together to keep this hope alive.”

“If we can avoid force against Syria, this will improve the atmosphere in international affairs and strengthen mutual trust. It will be our shared success and open the door to cooperation on other critical issues,” Putin wrote in the article.