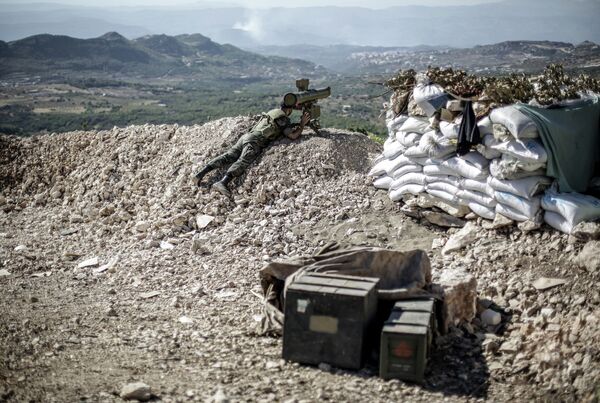 © RIA Novosti . Andrey Stenin
/
Go to the photo bank
Subscribe
The vast majority of Russians do not endorse a possible US-led military operation in Syria, and more than a half of them think their country should not get involved in the conflict, according to the latest poll, released Wednesday.

MOSCOW, September 11 (RIA Novosti) – The vast majority of Russians do not endorse a possible US-led military operation in Syria, and more than a half of them think their country should not get involved in the conflict, according to the latest poll, released Wednesday.

Seventy-seven percent of the respondents to the survey, by state-run pollster the Russian Public Opinion Research Center (VTsIOM), said they did not support a foreign military operation in Syria. Eleven percent endorsed it, the same figure as those who were undecided.

The poll’s findings clashed with a similar survey by the rival Public Opinion Foundation, which said Tuesday that Russians were split on international involvement in Syria, with 32 percent supporting it and 35 percent opposing it.

However, the survey that was released on Tuesday spoke only about international pressure and/or involvement, without elaborating, while the newer survey explicitly mentioned a possible US-led military operation, the likes of which have been slammed by Russian media and officials as “aggressive” and “unlawful.”

If such intervention does take place, Russia should either do nothing (43 percent of respondents) or supply Syria with arms (23 percent), the newer poll showed.

Thirteen percent said Russia should fight for the Syrian government, 4 percent wanted Russia to provide military support to the rebels, while 17 percent had no opinion on the matter. The figures were similar to answers to a similar question in the rival poll.

The newer poll also indicated that more Russians were taking an interest in Syria: 69 percent reported paying at least occasional attention to the conflict, compared with 30 percent who did not care and 2 percent who could not answer the question. In July last year, 45 percent said they were paying attention to Syria, while 52 percent said they were not.

A poll in June this year by the independent Levada Center – the third of Russia’s so-called big three pollsters – found that 60 percent of Russians paid “a little” attention to Syria, while 39 percent ignored the bloody 2 1/2-year conflict.

The latest poll, held from August 31 to September 1, covered 1,600 respondents nationwide and had a margin of error of 3.4 percentage points.