Russian 9/11 Victims Remembered in US 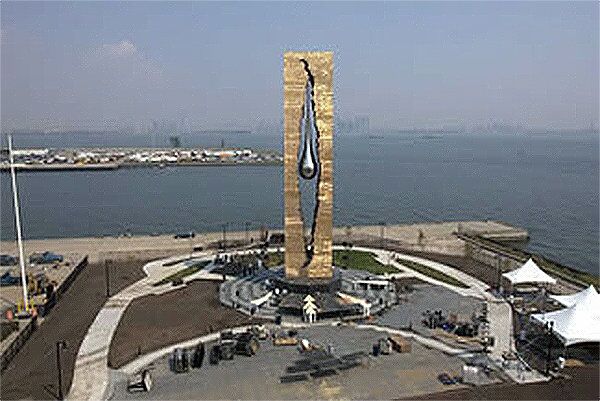 Among the victims of 9/11 being commemorated in the US Wednesday are dozens of people of Russian descent, one more indication of a common enemy both the US and Russia face.

Updated, correcting a reference to Bill Clinton's 2006 remarks from "then-President" to "former President."

WASHINGTON, September 11 (By Maria Young for RIA Novosti) – Valeriy Savinkin remembers exactly where he was twelve years ago, the day terrorists attacked the United States, including the World Trade Center (WTC) in New York, where his son had been recently employed.

“At this time I was working across the river, so from my window I saw everything. I saw the flames. I saw the second plane. I saw everything, and of course I was hoping he was okay, he would call me in a second,” Valeriy Savinkin said.

He paused, and then added, “It never happened. I saw by my own eyes how the South Tower and then the North Tower fell down.”

Twelve years later, it is still hard to talk about.

“We believed at that time and for many weeks ahead that we could find him,” Savinkin said in an interview with RIA Novosti, abruptly halting the conversation for a moment to compose himself.

The attacks turned hijacked airplanes full of people into weapons that killed nearly 3,000 in New York, Pennsylvania, and at the US Pentagon outside of Washington. Among those killed was 21-year-old Vladimir Savinkin, one of dozens from the former Soviet Union who lost their lives that day.

Marina Gertsberg was another victim. A 25-year-old who came to the US with her family when she was four years old, Gertsberg had begun working at the WTC just a week earlier.

Alexander Braginsky was 16 when he and his mother moved to the US. By Sept. 11, 2001, he was working as a manager at Reuters.

On Wednesday, as America marked the 12th anniversary of a national tragedy, many Russian-Americans also gathered for somber ceremonies and candlelight vigils, highlighting a shared grief and a common struggle both countries have against Islamic extremists.

Russia has faced violent attacks from people in the country’s North Caucasus region known as Chechnya, a predominantly Muslim area where rebels have long fought for independence from Russia.

Among the deadly incidents: a 1995 attack on a hospital that killed roughly 100 people; a 2004 hostage crisis at a school in Beslan that killed more than 330 people, roughly half of them children; the 2009 bombing of a train from Moscow to St. Petersburg; and scores of other attacks at schools, subways and public venues.

“Chechens have been fighting Russians for many generations, and some Chechens interpret the conflict as Muslims versus Christians… the US and Russia are both Christian countries,” wrote Clark McCauley, professor of social psychology at Bryn Mawr College, in a 2013 Psychology Today blog post.

“Al Qaeda members have a presence in Chechnya; some Al Qaeda members reportedly fought and died for Chechnya in the Beslan school hostage crisis in September 2004,” he added.

“The fact is, we face the same major challenges,” US Rep. Dana Rohrabacher told The Associated Press. He led a congressional delegation to Russia shortly after the April Boston Marathon bombing, allegedly carried out by two brothers from Chechnya.

“Of course these two countries have a common enemy. It was obvious when 9/11 happened, and Russia was one of the first countries to offer support to the United States,” said Savinkin.

Shortly after the 9/11 attacks, he said, families of Russian descent began reaching out together in grief.

“We saw the names of people of Russian descent, and started to get to know each other. I believe it’s about 70 families. We were trying to find our loved ones together,” he said, adding that the group eventually realized “We needed to do something together, and that something was a memorial that we organized in south Brooklyn.”

Originally intended to recognize victims of Russian descent, the memorial was funded primarily by the relatives of Russian victims, but its focus was expanded to honor all of the victims. Wednesday afternoon, hundreds gathered for a candlelight vigil. 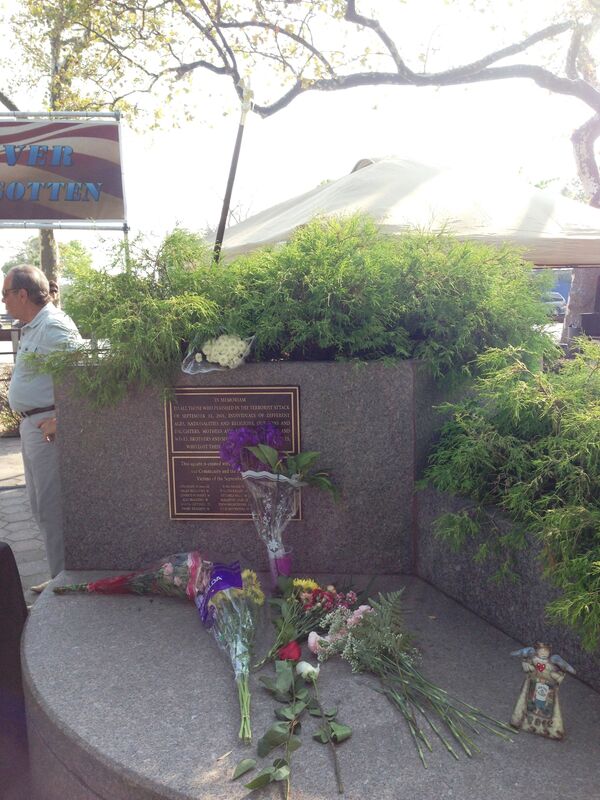 A 9/11 ceremony in Brooklyn on Wednesday drew scores of people, many of Russian descent, to recognize victims of the terror attacks.
© Regina Shamilova/Russian American Foundation

At the Harbor View Memorial Park in Bayonne, New Jersey, an estimated 600 people were expected to gather Wednesday evening at the base of a 100-foot (30 meter) tower of steel and bronze with a 40-foot (12-meter) nickel teardrop hanging from a jagged gash in the center of the piece.

“I would like to thank the people of Russia for this gift of solidarity in the war on terror,” said former President Bill Clinton at the 2006 dedication.

Known as the “Teardrop Memorial,” it was designed by Russian sculptor Zurab Tsereteli and dedicated as a gift from Russia to the US in 2006.

According to the memorial website, Tsereteli was in Moscow and watching television on 9/11, and was moved to tears when the towers collapsed.

“He got the idea for this memorial on 9/11 when he looked out his window in Moscow and he saw the people of Russia crying over the WTC attacks, everyone was crying,” said Dolores Kelly, vice chairwoman of the Sept. 11 Bayonne Remembers Committee, and one of the organizers of Wednesday’s ceremony.

“I think it was a wonderful gift and I think it was given to us out of their sorrow for what occurred on 9/11,” she told RIA Novosti.

Such commemoration events are important, said Savinkin, not just for the relatives of those who were lost, but for civilized societies around the world, “Because we have to protect our future. Future generations should know what happened. Otherwise we are not protected from the terrorists or any other events like this one.”